Watch: "Has Anyone Ever Seen Bees Stopping Play Before?" Bizarre Incident In County Cricket 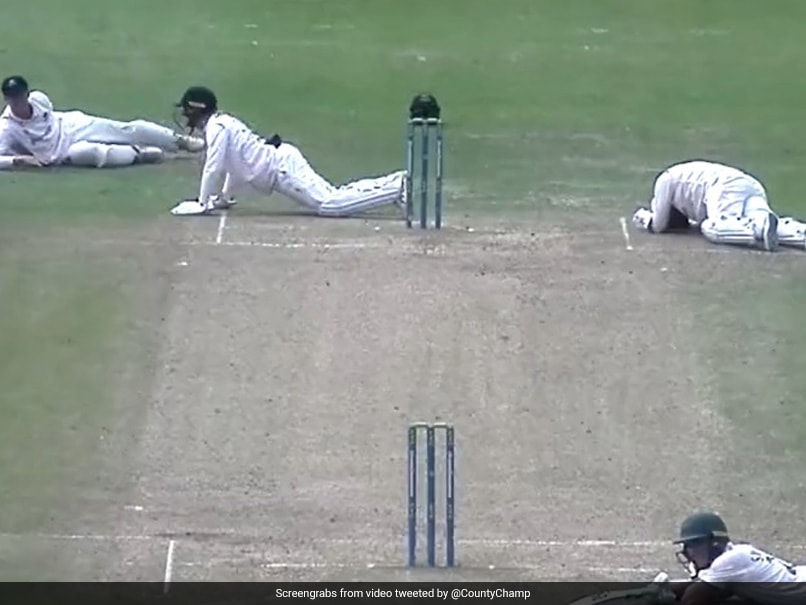 Leicestershire and Sussex players on the ground as bees swarm the field.© Twitter

In a bizarre incident, during a County Championship 2022 Division Two game between Leicestershire and Sussex, the match had to be halted as bees flew over the ground. The incident happened on Sunday during the second innings of Leicestershire. Batters Harry Swindells and Callum Parkinson were at the crease, with Delray Rawling bowling, when suddenly all the players could be seen running for covers. The batters, fielders and umpires could be seen stooping on to the ground to save themselves from getting stung by the bees.

It made for a very funny sight and Leicestershire could not help but see the funny side of it. ̶"R̶a̶i̶n̶…̶B̶a̶d̶ ̶L̶i̶g̶h̶t̶…̶ 𝐁𝐄𝐄𝐒 stop play??? Not something I thought I'd be tweeting today. A swarm of bees force the players and umpires to hit the deck at Grace Road. Ollie Robinson's bowling spin too. Just an average Sunday," they tweeted.

Not something I thought I'd be tweeting today. A swarm of bees force the players and umpires to hit the deck at Grace Road.

Has anyone ever seen bees stopping play before? #LVCountyChamp pic.twitter.com/za1kb1Rqww

Indian cricket team's Cheteshwar Pujara was part of the game. Playing for Sussex, he scored 3 as his team batted in only one innings in the drawn match. Pujara has been in great form in the County Championship for Sussex. He has scored two double centuries and two tons. His great show has led many to believe that he is prepared to make a comeback to the Indian Test team. Pujara was dropped from the Indian team for the home series against Sri Lanka after some poor run of form. However, with India playing England in a lone Test starting on July 1, which will complete the away series that Team India has been leading 2-1 since last year, the BCCI selectors may be tempted to bring Pujara back in.

"Yes, it should be kept in mind (for India's Test match in England). Just last year we saw that before the World Test Championship final, New Zealand played two Test matches in England. Because of that, they got acclimatised to the conditions there and when they got similar conditions in Southampton for the WTC final. It was raining. They were used to the condition. This is what is happening to Cheteshwar Pujara. He has gotten used to batting in English conditions, against their bowlers. Yes, there is a huge difference between a County attack and a Test bowling attack, but when a batter is in rhythm, why not take advantage and consider him," Gavaskar told in an interview on Sports Tak.