Speaking for the first time on the issue which became a talking point during Australia's disastrous of India, Sutherland backed the team management that had axed four players. 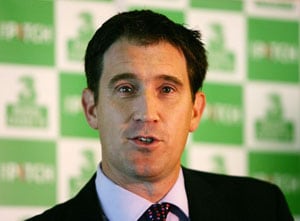 Cricket Australia CEO James Sutherland backed the team management that had axed four players, including then vice-captain Shane Watson, ahead of the Mohali Test against India in March on ground of breach of discipline.

Speaking for the first time on the issue which became a talking point during Australia's disastrous series, Sutherland said he has in-depth understanding of what had happened at that time.

Coach Mickey Arthur had dropped Watson, James Pattinson, Usman Khawaja and Mitchell Johnson for the third Test of the series for not providing written feedback on how to improve their own and the team's performance.

"I'm disappointed we got to that stage. I now have a pretty in-depth understanding of where and how it got to there and I'm still disappointed that it happened in those circumstances," Sutherland told a leading cricket website.

"I'm supportive of the decisions that were made at the time and I'm a firm believer in the fact that those decisions will ultimately stand us in good stead as we build to sustained performance at the highest level.

"I think it's pretty well understood internally what I think about it, and the need for us to ensure those things are dealt with better before they ever get to that stage," he added.

Sutherland insisted that the decision was not influenced by one particular issue.

"It would be dangerous to narrow it down to one or two things. It was a culmination of a whole lot of things, and to pinpoint it as being communication of people not necessarily understanding where they were... yes that is one of the reasons no doubt. But there's a whole lot of others as well I think."

Sutherland said they lay great emphasis on players' all round development.

"We want to be building or developing the best players and part of that is developing players who are not only capable in a cricketing sense. They are strong of character, they're highly resilient, they're able to adapt, and they have all of these character traits.

"To some extent you're born with those and to some extent they're circumstantial according to your environment and also they can be developed.

"That's part of our challenge as a sport in developing our best talent is to do that even better in this day and age, understanding the variability of cricket today, the need to adapt and the need to be resilient, to get through tough conditions in a foreign country you might never have visited before. All of those things are part of character," he said.