Cheteshwar Pujara's strike rate has improved since the West Indies tour, where he scored 62 in two innings at 31.00. In the first Test against New Zealand in Kanpur, Pujara scored 62 and 78, sharing two century-plus partnerships with Murali Vijay to lay the foundation for India's massive 197-run win. 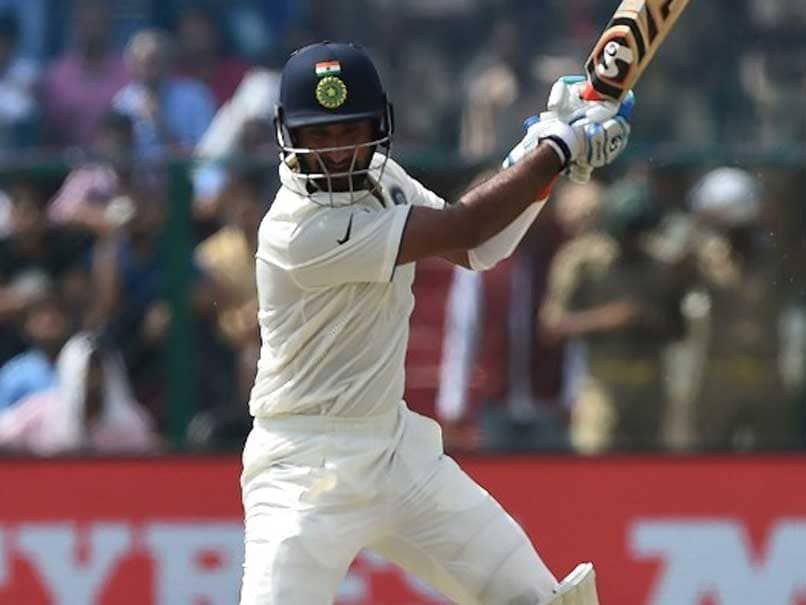 Kolkata: Test specialist Cheteshwar Pujaramay have drawn criticism for his slow strike rate during the tour of West Indies but India coach Anil Kumble on Wednesday threw his weight behind the batsman saying he's a vital cog in the team's scheme of things and no one has put pressure on him.

Pujara's strike rate has improved considerably since the West Indies tour, where he scored 62 in two innings at 31.00. In the first Test against New Zealand in Kanpur, Pujara scored 62 and 78, sharing two century-plus partnerships with Murali Vijay to lay the foundation for India's massive 197-run win.

Terming himself old-fashioned, Kumble said the talks about strike-rate in Tests should be confined to the bowlers.

"...I'm a bit old fashioned. I know there is a lot of strike rate in the last eight years after the advent of T20. As far as I was concerned, when I was playing in Test cricket strike rate was spoken about bowlers, not batsmen," Kumble said ahead of the second Test against New Zealand, starting on Friday.

"That's how I looked at it. In the team you need different characters, different quality players, different players with skill sets which are suited to challenges in a Test match. Because every session can be different in a Test match, we have seen that. And that's the beauty about Test cricket. In my point of view, strike rates are only relevant to bowlers in Test cricket, not the batsmen," he added.

Former chief selector Sandeep Patil, in an interview, had said that Pujara's form was a concern in the West Indies as Kumble and Test captain Virat Kohli had spoken to the batsman on improving his strike rate. But the Indian coach insisted that the team had never put any pressure on the batsman.

"I'm extremely surprised and a bit disappointed this talk keeps coming up. As long as someone reads the situation and plays according to it, what's expected from the team, it's fine. He's a very important cog in our plans. He's been successful. I know that he will continue to be successful.

"We all know the importance of first session in a Test of a series. So the relevance of Pujara is there. You need to bat according to the situation," the 45-year-old said.

Gautam Gambhir has been called in as a replacement for the injured KL Rahul and the left handed opening batsman is back in the Test team after two years.

Asked if Pujara can now breathe easy with a strokemaking Gambhir at the top, Kumble said: "I don't think Pujara has ever breathed easy, from all you perspective and some people who are constantly watching him."

On playing Gambhir, he said all 15 would be available for selection.

"It's actually nice to have Gautam back. Unfortunately Rahul got injured in the last Test match. I think something’'s happening with the openers. For some reason they are getting injured. Vijay got injured in West Indies. Now Rahul. It's unfortunate. Rahul was batting brilliantly.

"But having said that Gautam has been done really well in domestic cricket. He is a part of the 15. I don't want to give away anything. All 15 are available for selection."

Kumble also backed Rohit Sharma, who flopped in the first innings of the opening Test but returned among runs with an unbeaten 68 in the second innings to contribute to India's win.

"It ensured that we take the momentum and it carried over after that dominating session. It's not just good for the team but I'm sure it would have done a boost to his confidence.

"In this squad we will only look at what is needed for that playing XI. We have constantly gone with five bowlers but in the last Test we felt four bowlers with an additional batsman was needed, so we opted for Rohit at no 6."

The New Zealanders have brought in veteran offspinner Jeetan Patel in place of injured offspinner Mark Craig and Kumble said they would be watchful.

"We know he has played a lot for New Zealand. He's done well in the county championship recently as well. We know quite a bit about what he can do."

Asked about New Zealand's experienced opener Martin Guptill's woeful form in the first Test, Kumble said: "Well it is never easy for someone to come to the subcontinent and play his shots. He is a strokemaker. We know Guptill is a quality player but it's not easy coming to the subcontinent having not had good form. From our perspective we hope that continues. You like the openers to get out early. That's what we like to look at doing. That's true of any Test team."

The overcast conditions and the fresh wicket may be a challenge for India but Kumble said they have the ammunition to counter any challenge.

"There's been a lot of rain. Hope rain does not play a spoilsport during the Test. It will be a good wicket. I've already spoken that we have the squad to encounter any challenge and adapt to whatever conditions. We are not really worried too much about the pitch. We have all our bases covered," he concluded.