1st T20: Hafeez sets up a big win against Zimbabwe

Pakistan continued their winning streak in Zimbabwe with a crushing victory in the first Twenty20 international. Their batsmen treated the opposition attack with utter disdain and smashed Zimbabwe for the highest total they have ever conceded in a Twenty20. 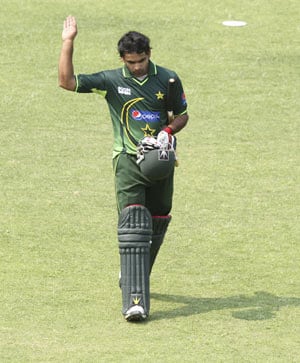 Pakistan continued their winning streak in Zimbabwe with a crushing victory in the first Twenty20 international. Their batsmen treated the opposition attack with utter disdain and smashed Zimbabwe for the highest total they have ever conceded in a Twenty20. Pakistan bowled with precision, fielded with energy and commitment, and skittled Zimbabwe out in the 16th over to register a comprehensive win. Mohammad Hafeez stole the headlines in both departments, scoring 71 with the bat and taking four wickets.

By contrast, Zimbabwe slumped into a greater state of haplessness, first with their lacklustre display with the ball and then with an uninspiring chase. Their three frontline bowlers were wayward and unconvincing, and their fielding sub-standard which left them with too much to do with the bat.

Pakistan's smash-and-grab innings started when Asad Shafiq tore into Zimbabwe's senior fast bowler Chris Mpofu, who made every mistake in the book, mostly by bowling too short. Shafiq scored four boundaries off his second over and brought up the first six of the innings, with a pull off Elton Chigumbura. Hafeez was happy to take a back seat in the early stages of the innings but took over when Shafiq was run out by a sharp piece of groundwork from Charles Coventry at short fine leg.

Hafeez took a special liking to Hamilton Masakadza's medium pacers, and showed off the lap sweep in extravagant style, getting to his half-century in 34 balls. Zimbabwe could have prevented him from reaching the landmark when Hafeez pulled to deep midwicket on 45, but Mpofu parried the ball over the boundary for six instead of catching it.

Zimbabwe's fielding was not up to standard again and they let go of too many chances. Jarvis mistimed a catch off Rameez Raja at mid-on and Vusi Sibanda did the same thing in the next over, giving Hafeez another lifeline. Coventry was the only one with a solid pair of hands and he held on to a cross-batted shot from Hafeez that just did not have enough on it to go all the way.

Rameez Raja did not live up to the hype. His 23 runs came mostly in singles and he struggled to time his shots. He was out lbw to Ray Price in the 17th over, allowing Umar Akmal and Shoaib Malik the opportunity to finish strongly.

Both were dropped, Umar by Tatenda Taibu behind the stumps and Malik by Mpofu in his followthrough. Mpofu's day only got worse when Umar slapped him for 15 runs in his penultimate over. Malik made little impact but Sohail Tanvir was destructive at the end. He was almost caught in the deep, but Sibanda had to abandon the catch when he was pushed over the boundary by his momentum. The mistake cost Zimbabwe 18 runs in the last over.

With a massive task looming over them, Zimbabwe were overwhelmed but showed signs of greater intent than they have done previously in the series. Vusi Sibanda started with a stunning drive but his second aggressive stroke, off a length ball, saw him caught magnificently by Misbah-ul-Haq at mid-on. Misbah ran backwards and took the catch over his shoulder, with both hands. Sohail Khan could not take the credit for that wicket but he deserved the next one, which came two balls later when newcomer Cephas Zhuwao hung his bat out and got an edge through to Umar.

Brendan Taylor, Chamu Chibhabha and Hamilton Masakadza tried to build momentum but Taylor and Masakadza fell trying to play big shots and Chibhabha became the second of Hafeez's victims when he was trapped lbw. Charles Coventry was the only Zimbabwe batsmen who was able to get more than a start. He thumped four fours and a six before top-edging off Saeed Ajmal.

Hafeez, fittingly, finished things off when he bowled Price with a flat, straight delivery, extending Price's poor day. Price had sent down six wides while bowling and strayed too far down the leg side. Hafeez, however, was bang on target and finished with his best figures in T20s to continue his golden run in Zimbabwe.

Comments
Topics mentioned in this article
Cricket New Zealand Cricket Team Zimbabwe Cricket Team Pakistan Cricket Team Asad Shafiq Mohammad Hafeez Chris Mpofu
Get the latest updates on ICC Women's Cricket World Cup 2022 and IPL 2022, check out the Schedule , Live Score and IPL Points Table. Like us on Facebook or follow us on Twitter for more sports updates. You can also download the NDTV Cricket app for Android or iOS.