Viswanathan Anand takes on Magnus Carlsen in Game 8 of the World Chess Championship under way in Sochi. Catch all the live updates here: 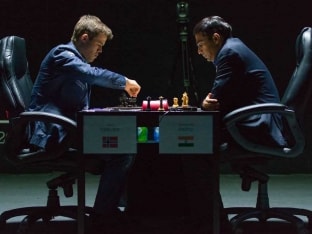 Carlsen makes a move against Anand at the World Chess Championship in Sochi.

Norway's Carlsen currently leads the match by one point but Anand has the opportunity to take the lead if he wins today. Both men played out a marathon draw on Monday in a game which involved 122 moves, one of the longest in the history of the game.

Anand, who is looking for his sixth world title, had lost to Carlsen in Chennai last year.