Viswanathan Anand is aiming for his sixth world title, having lost to Norway's Magnus Carlsen in Chennai last year. This year's world championship is being played in Sochi. Catch all the highlights here: 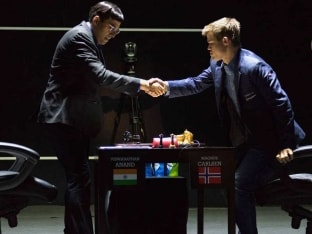 Anand (L) and Carlsen during the World Chess Championship in Sochi.

The fourth round of the World Chess Championship between defending Champion Magnus Carlsen of Norway and Viswanathan Anand ended in a draw after 47 moves leaving the score tied at 2-2 after four games of the 12-game Match. (Full Chess Coverage)

Anand had drawn a marathon opener on Saturday and went down tamely in the second game, which lasted for only 34 movers.

However, Anand drew level winning the third game on Tuesday.

Comments
Topics mentioned in this article
Viswanathan Anand Magnus Carlsen Chess Chess
Get the latest updates on IPL 2021, IPL Points Table , IPL Schedule 2021 , live score . Like us on Facebook or follow us on Twitter for more sports updates. You can also download the NDTV Cricket app for Android or iOS.