The much-awaited clash between Anand and Norway's world number one Magnus Carlsen will happen as early as in the second round. 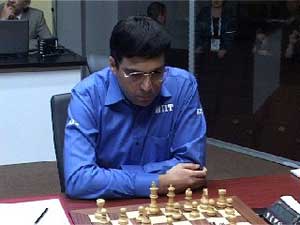 World champion Viswanathan Anand will take on Levon Aronian of Armenia in the first round of the Norway Chess 2013 super tournament that gets underway here.

Anand secured five whites in the nine-round tournament by finishing joint second in the blitz event that was played to prepare the drawing of lots.

The top five contestants in the blitz tournament will get five white and four black games in the 10-player event which is also one of the strongest ever.

The much-awaited clash between Anand and Norway's world number one Magnus Carlsen will happen as early as in the second round and the latter will get to play white in that encounter.

Carlsen, who had expressed his disappointment at Chennai being the awarded the hosting rights of the next world championship match between him and Anand, said he will not let that news "diminish the joy and excitement derived from playing the top level Norway chess tournament".

For Anand, apart from the clash with Carlsen, it will also be a real test against a very high quality opposition.

The event also boast of participation of world number four and former world champion Veselin Topalov of Bulgaria who is fresh from a fantastic victory in the Grand Prix tournament.

Sergey Karjakin and Peter Svidler of Russia and Hikaru Nakamura of United States are the other players, who are a big force to reckon with while Teimour Radjabov of Azerbaijan will look forward to regain his touch.

Wang Hao of China and local talent Jon Ludvig Hammer complete the line-up of the 10-player tournament to be played on a round-robin basis.

For the Indian ace it has been a decent start to the competition.

The blitz tournament was taken quite seriously by Anand, whose joint second finish was a good result even though he suffered a shocking loss at the hands of lowest-ranked Hammer.

Sergey Karjakin won the tournament scoring 6.5 points while Anand, Carlsen and Nakamura were tied for the second spot a half point behind.

Svidler finished fifth on 5.5 points after losing the last round against Carlsen. Topalov was completely off-colour in the blitz, finishing last with just one point from nine games while Aronian was another surprise for the spectators as he ended ninth scoring 2.5 points.