Viswanathan Anand draws in penultimate round too 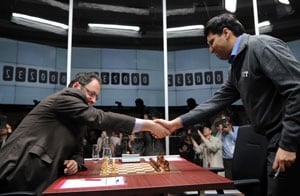 The 24-move draw in the penultimate game under the normal time control gives Anand a slight edge as he plays with white in the last game. Should the deadlock continue, the players will play tie-break games of shorter duration to determine the winner. The scores now stand at 5.5-5.5.

This was the third straight draw in the Championship after Anand scored the equaliser in game eight and now the Israeli will be hoping to get another draw and move to the tie-break stage.

It was a Nimzo Indian defence by Anand and this time the Indian ace proved his point by coming out with a rare move on his eighth turn. Gelfand sank in deep thought of close to thirty minutes but did not find a successful way of proving his advantage.

On move 11th, Anand produced the first new move when he captured a knight with his dark squared Bishop. The move was aimed at stopping white from getting a definite control in the center and Gelfand could not prove white to be better at any stage.

"There are a lot of subtleties in the position after the opening, I delayed the knight capture for a move as I thought it was right to do it now," Anand said at the post-match conference.

This was already a major shift from Anand's last black game where the King suffered a long time and was saddled with a passive position out of the opening. This time, the element of surprise was so high on Gelfand that he fell behind on time by almost an hour.

Anand took his chances on move 14 when he went for a pawn trade and shifted his queen over to the king side a move later. Gelfand was still hoping for an advantage when he went for the trade of queens on the 17th move but Anand was well armed even though white still retained the Bishop-pair advantage.

"I was not playing for time. The reason I went for this tactical operation was because I wanted to neutralise the Bishop pair," he said.

After move 24, Anand proposed the peace treaty which was immediately accepted by Gelfand. The match now enters the most crucial phase and Anand said he will think about the rapid and blitz games when he reaches there.

"We still have this last game, I will go and get ready to play that, will think about the tiebreaker when we reach there," said the defending champion.