It started with a great deal of excitement and anticipation but year 2013 turned out to be a disappointing one for Indian chess as the legendary Viswanathan Anand got outplayed in his own backyard to surrender the World Championship crown.

It was a story of missed opportunities, expected draws and some unexpected losses for Anand as the veteran lost to Norwegian prodigy Magnus Carlsen in the World Championship match held in his hometown of Chennai.

There was a sense of enthusiasm in the beginning of the year as India started its preparation to host the World Chess Championship in Chennai, where the Indian great was scheduled to defend his title, which he had won five times - 2000, 2007, 2008, 2010, 2012.

Anand started the year with a joint-third finish after suffering a shocking last-round defeat against Wang Hao of China at the 75th Tata Steel Chess tournament.

The Indian came back strongly, notching up his first title of the year when he scored an emphatic victory over German Arkadij Naiditsch to lift the Grenke Chess Classic trophy.

Anand then competed in a tough field at the Zurich Chess Challenge and finished second after beating Vladimir Kramnik of Russia in the final round.

However, the year went from good to bad for Anand from here on as he finished third in the Alekhine memorial chess event after playing out a draw with Boris Gelfand of Israel in the ninth and final round at St. Petersburg, Russia in May.

In Norway Super tournament, Anand faced off with his world championship challenger Magnus Carlsen and the Indian held him to an easy draw.

He crushed Veselin Topalov of Bulgaria but suffered a shocking defeat to Hikaru Nakamura of US next. Despite a couple of draws, he stayed in contention for the title but a heart-breaking loss to Wang Hao of China meant he finished fourth.

Next month, Anand participated in Tal memorial and finished second in blitz tournament but in the main event, he lost to Fabiano Caruana of Italy, drew with Dmitry Andreikin of Russia, won against Russian Alexander Morozevich, and was held to a draw by Gelfand.

However, it was the shock defeat to Carlsen in the fifth round which pushed him down the points table to seventh spot. He also lost to American Nakamura before drawing the next three games to finish ninth.

With four months to go for the much-awaited World Championship, Anand started his preparation for the tournament with his seconds at an undisclosed location even as the hype surrounding the match touched a crescendo. 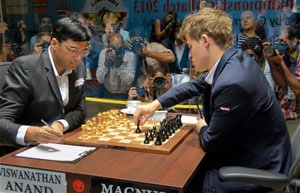 However, the 12-game tournament turned out to be a disappointing affair for Anand as the 22-year-old Carlsen broke the Indian brick by brick and dethroned him of his title with a draw in the 10th game.

Anand drew the first four games but then suffered two successive losses. The Indian drew the next two games but in the ninth round, Anand succumbed to another loss. Carlsen then drew the 10th game to complete his coronation as the new king of chess.

Anand took the heart-breaking defeat to Carlsen in his stride and participated in the London Chess Classic. He was in joint lead on seven points at the half-way stage of the preliminaries.

A victory over Luke McShane of England and an easy draw against tailender Andrei Istratescu of France helped him reached the quarters but a loss to Vladimir Kramnik of Russia saw him bow out of London Chess Classic.

While Anand tumbled, the young brigade, including Parimarjan Negi, notched up a few wins in the year.

Negi finished at the top along with seven other GMs in the 29th edition of the Capelle-la-Grande tournament, before becoming the joint winner of the USD 43,000 World Open Chess in Virginia.

The Delhi player continued his brilliant form and clinched the Politiken Cup 2013 after emerging with a fine score of nine out of a maximum possible 10 points.

India also regained the team title in World Youth (Under-16) Chess Olympiad after a gap of five years with a resounding victory over Iran in the final round in Chongqing, China.

The Indian quartet of S A Gagare, Murali Karthikeyan, Diptayan Ghosh and Sayantan Das beat Iran 3.5-0.5 in the 10th round to top the team standings with 30.5 points ahead of heavyweights Russia and Turkey.

In Turkey, former Under-14 world champion and Grandmaster Vidit Gujrathi won the bronze medal in the World Junior Chess Championship.