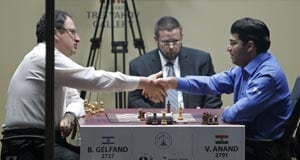 2000-2001 New Delhi-Iran: Won for the first time winning in knockout format. Starting with 128 players, Anand marched his way ahead in New Delhi to set up the finale with Alexey Shirov of Spain. It was a six-games final that lasted only till the fourth. Anand won three and drew one at Tehran in Iran to be crowned the world champion.

2007 Mexico City (Mexico): Pitted against the best in the world in a match tournament spread over 14-games between eight players, Anand was in his elements and won this event in style. This also gave him the right to play the next world championship in a match format against the seemingly invincible Vladimir Kramnik of Russia.

2008 Bonn (Germany): The World championship was back to a match format, something which the chess world had been craving for a long time. Anand started as the underdog against Kramnik but the entire world saw a grand transformation in the Indian. It was a 12-games match that ended after 11. Anand won three, lost one and drew the remaining seven to reach 6.5 points. The transformation was in preparation. Kramnik was simply outdone thanks to some extremely well done homework. Anand became the first player in the history to win world championship in three different formats: Knock out, match tournament and match.

2010 Sofia (Bulgaria): It was eruption of an Icelandic volcano that disrupted all flights across Europe. Anand had to undertake a 30-hours journey by road to reach Sofia. He asked for three days extension but was granted only one day. He was playing against all odds against the lion - Veselin Topalov in his own den. Anand started with a first round loss but won the title winning the last game with black pieces. The loss was shattering for Topalov. He slipped from being the top player then to number 12 now.

2012 Moscow: The toughest title clash for Anand ended in the tie-breaker. Boris Gelfand was written off much before the match started. Anand was an overwhelming favourite but the Israeli gave it all he had. He even came close to winning one of the rapid tie-break games, hard to predict what might have happened had he won that simple position. Yet, all the credit to Anand. He struck when it mattered. Whether it was the eighth game after he lost the seventh or the rapid games when he pushed Gelfand around in equal position. After a 6-6 deadlock, a 2.5-1.5 triumph for the world champion in the rapid games.