Another draw for Viswanathan Anand at Final Masters

World champion Viswanathan Anand's hunt for an elusive victory continued as he was held to a draw by Fabiano Caruana of Italy in the eighth round of the fifth Final Masters here at the Alhondiga. 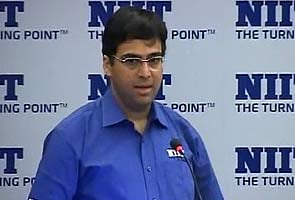 World champion Viswanathan Anand's hunt for an elusive victory continued as he was held to a draw by Fabiano Caruana of Italy in the eighth round of the fifth Final Masters here at the Alhondiga.

The eighth draw in as many games means that Anand is now out of any real title contention in the six-player double round-robin tournament barring a miracle that seems pretty unlikely.

Draws, in fact, were the order of the day as other two games in the super tournament also reached the same result.

Sergey Karjakin of Russia signed peace with world number one Magnus Carlsen of Norway while Levon Aronian of Armenia suffered before he could split the point with Francisco Vallejo Pons of Spain.

With just two rounds remaining now, Caruana and Carlsen remained firmly in front on 13 points in the soccer-like scoring system in place here.

Aronian remains the only real threat to the two leaders on 10 points while Anand could only inch himself up to eight with each of his draw fetching just one point.

Karjakin remains fifth on six points while Vallejo Pons is at the bottom of the tables having amassed five points so far.

It turned out to be an exciting day for Anand barring the final result.

Expectedly, Caurana went for the Grunfeld defense that Anand has put to test off late with a typical treatment but the young Italian showed his in-depth understanding in the intricacies to steer clear of any real trouble.

The middle game witnessed a quick exchange of queens after which Anand had slightly better prospects which were slowly neutralised by Caruana with exchanges at regular intervals.

By move thirty, the outcome of the game was pretty clear as a level endgame was reached and then a couple of forcing exchanges led to a perfectly drawn rook and pawns endgame.

Carlsen employed the French defense as black against Karjakin and went for a line which is out of favour recently in top chess.

Karjakin was surprised but could not find anything special to put pressure on the king and after a few exchanges the presence of Bishops of opposite colours ensured parity for Carlsen. It was the shortest game of the day lasting 35 moves.

The most interesting duel of the day was between Vallejo Pons and Aronian in which surprisingly the world number two Armenian was taken to task.

Modern defense by Aronian only resulted in giving Vallejo Pons a chance to go guns blazing at the black king in the middle game and the Spaniard did not miss his chances.

By move 25, Vallejo Pons had control and definite advantage but an unwarranted exchange sacrifice soon after brought Aronian back in the game.

Thereafter, Vallejo Pons had a chance to continue to fight for an advantage on move 30 but having missed that too, the computer analysis always showed balance even though the position appeared ripe for complications.

The draw was agreed to in the knight and pawn endgame after 56 moves.