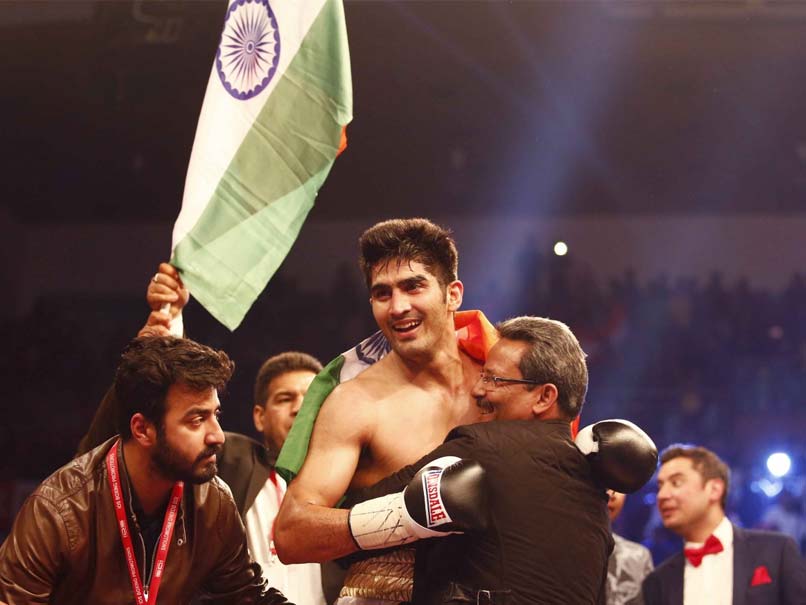 Vijender Singh knocked out Francis Cheka in the 3rd round to retain his WBO title.© NDTV

Extending his winning streak to eight, Vijender Singh on Saturday knocked out Francis Cheka in the third round itself to successfully defend his WBO Asia Pacific super middleweight title at Thyagraj stadium in Delhi.

At a packed house in the national capital, Vijender didn't let Cheka settle in and maintained the lead right from the start to earn his seventh knock out and eight win in the professional boxing career.

Vijender started dominating after defending the early punches from his opponent to lead 3-1 before landing seven punches to Cheka's three in the second round.

The third round witnessed the Haryana boxer completely dominating the contest as the referees ruled the bout in Vijender's favour by a technical knockout.

The Tanzanian, reigning World Boxing Federation (WBF) Super Middleweight champion had won 32 of his 43 bouts before losing to the Indian pugilist. Of those wins, 17 had come by knockout.

Earlier, Vijender had defeated Australian Kerry Hope in a gruelling 10-round contest in front of his home crowd at Thyagaraj Stadium in New Delhi to take his first professional title in July.

"I trained hard in Manchester for two months for this. I thank all my coaches for the effort they put in. Cheka talked so much but I believed in my punch power, and I have done it," Vijender said after the bout.

Celebrities adorned the front rows surrounding the ring. From five-time world champion M C Mary Kom to Minister of State for Home Affairs Kiren Rijiju to star wrestling duo of Sushil Kumar and Yogeshwar Dutt, it was a power-packed front row to cheer for Vijender from ringside.

However, the man who stole the show among the front-row occupiers turned out to be celebrity yoga guru Baba Ramdev. He walked in with Sushil to a loud applause from the packed stadium and was instantly mobbed for selfies and handshakes by the crowd.

Walking in to the now trademark tune of 'Singh is King', Vijender had the crowd excited even before he entered the ring. When the bout finally kicked off, Cheka seemed quicker off the blocks even as Vijender played block and dodge.

However, the Indian got into the groove soon enough and landed lusty uppercut to the body to rattle Cheka.

Cheka seemed on the backfoot in the second round and was wary of having a go at the hard-hitting Haryana-lad, who stuck to landing clean and straight blows. Cheka was also undone by the reach advantage that Vijender enjoyed.

While Cheka struggled to keep his balance owing to his shorter reach, Vijender put his long arms to good use.

The evening started with a 61kg contest between Rajesh Kumar and Uganda's Mubakaraka Sseguya. In a rather slow four-round contest, it was hard to pick between the two counter-attacking boxers and it reflected in the judges' decision, who awarded the bout to the Indian in a split decision of 39-37 37-38 39-37.

Next up was Deepak Tanwar (67kg) against Indonesia's Sutriyono Bara Boys. The bout seemed grossly mismatched and Deepak looked way more than a handful for his rival. Deepak, undefeated in the circuit so far, was hardly tested before forced an early end to the proceedings.

It took him one and half a round to pummel his rival, forcing the referee to stop the bout and award a Technical Knockout to Deepak, who stretched his unbeaten streak to four with this win.

Dharmendra Grewal (95kg), six fights old in the circuit, was up against Abasi Kyobe, another Ugandan. The crowd was up on its feet on every punch scored but that did little to hide the sheer sluggishness of the bout. It went the whole hog of four rounds though and Dharmendra was the judges' unanimous choice for the winner.

There's no stopping the champion @boxervijender!! Made us all proud :) #NightOfTheChampions

In a lightweight face-off between Kuldeep Dhanda and Indonesia's Egy Rozten, it was once again the crowd favourite, who emerged victorious, the gulf in quality quite apparent. This was Kuldeep's third successive triumph in the circuit, keeping his unbeaten record intact.

The last bout before the main event was between Pardeep Kharkera (67kg) and Australian Scott Edward. The six-rounder turned into a battle of attrition as both the boxers seemed exhausted by the second round itself.

Fighting with shell guards, the two tumbled over twice in the course of the bout trying to dodge each other.

By the fifth round, the Australian looked exceptionally exhausted and was brought down twice by Pradeep. The Australian had done just enough for the judges to rule unanimously in his favour.

However, Edward did not seem happy after the victory and was seen having a verbal altercation with Pradeep at the end of the bout.

Listen to the latest songs, only on JioSaavn.com
Comments
Topics mentioned in this article
Vijender Singh Boxing
Get the latest updates on India vs England Series, India vs England , live score and IPL 2021 Auction . Like us on Facebook or follow us on Twitter for more sports updates. You can also download the NDTV Cricket app for Android or iOS.