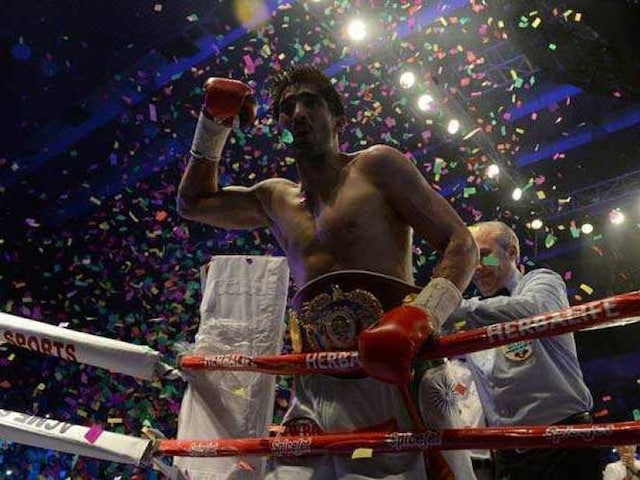 Elated and exhausted in equal measure after being crowned the WBO Asia Pacific champion, Indian boxing star Vijender Singh said he will savour the triumph for a while before looking at the possibility of a showdown with Pakistan-origin British boxer Amir Khan, who is keen for a face-off with him.

The victory propelled him to the 15th spot in the WBO rankings and he will have to defend his title in the next two months.

Dedicating the triumph to the late Muhammad Ali, Vijender got just a few moments to celebrate with his team before being asked "what next"?

"I want to take some rest, may be for a month or so and we will see after that," was his initial response.

But with no end to questions on his future in the post-bout press conference, the star finally listed his options.

"My world ranking will be in the top 15. I will get harder fights now but I am ready for it. I will work with my coaches and my team and we will go for it.

"Mine and Amir's weight categories are different. So, in case he increases his weight or I decrease mine then we can work it out. We are thinking about it, so let's see. I hope that when that big fight happens, it happens in India only," said Vijender, thanking the fans several times during the presser for packing the 5,000-capacity Thyagaraj Stadium on Saturday night.

Amir, a former WBA world champion, is primarily a lightweight boxer, who recently tried himself in the middleweight by taking on world champion Saul Canelo Alvarez. However, it ended in disaster for him when he was knocked out in the sixth round.

Amir had expressed a desire to take on Vijender in India before the showdown with Alvarez but it remains to be seen whether he would give it a shot now after moving back to his original weight category.

"In the long term, we will keep an eye on Amir Khan as well. That fight over here will be phenomenal, it will be a massive fight. We have tentatively talked with Amir's team, I know they want it, I know Vijender wants it," said Vijender's British promoter Francis Warren of the Queensberry Promotions.