Vijender Singh will fight French boxer Matiouze Royer in his fifth pro bout. The boxers had a small confrontation during their official weigh-in 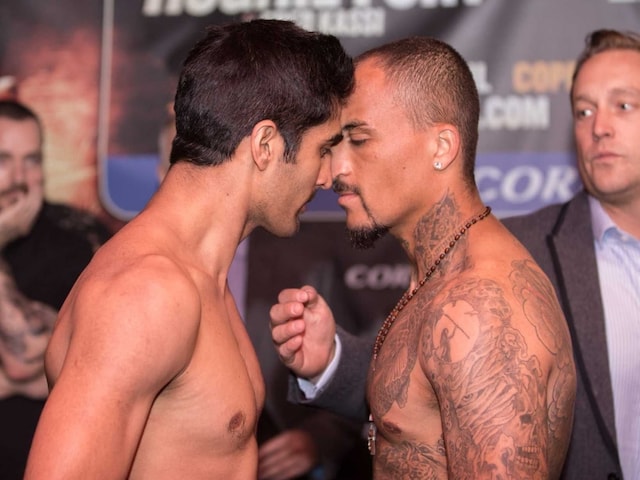 Vijender Singh and Matiouze Royer during their official weigh-in before their fight on Friday.© NDTV

Vijender has promised another knockout show but the Indian boxing star's unbeaten run will be put through a tough challenge when he squares off against the experienced Frenchman in a super middleweight contest here on Saturday.

Royer, 29, is Vijender's most experienced opponent to date. Vijender has won all his four bouts via technical knockouts in under three rounds.

The tall pugilist from Bayonne in South West France got embroiled in a confrontation with Vijender after the pair had weighed in. Despite the massive showdown being little more than 24 hours away, Royer couldn't wait to get his hands on the Indian.

Both men were forced away from each other by officials as tempers threatened to boil over. Royer is a veteran of 44 fights, claiming 3 of his 14 wins via knockout and is promising to spoil the Indian party.

"I know I've got the beating of Vijender already; I saw it in his eyes. He looked scared to me. There's no doubt in my mind I'll knock him out tomorrow night. There's a lot of hype around this guy and I can't wait to be the one to put him in his place," said Royer.

He added: "I'm the more experienced fighter and I'll show it tomorrow. There's no way I'm letting this guy beat me; he's only had four professional fights. He won't have a reply for anything I throw at him and once I start landing it will be game over for India's golden boy."