Tyson Fury Vows to be 'Most Charming Champ Since Muhammad Ali' 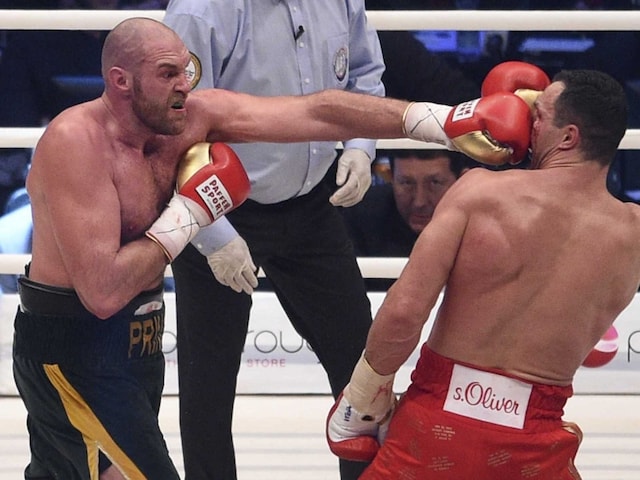 "I always said what I would do and I delivered. I didn't have this confidence for nothing," beamed Fury, 27, after his unanimous points win ended Klitschko's run of 19 consecutive defences.

"I knew all along I could win the fight," said Fury, whose corner exploded into celebration once the verdict was announced.

"I saw in his eyes that he was going to lose this fight."

The new champion celebrated his victory by singing Aerosmith's "Don't Want to Miss a Thing" in the ring, which he dedicated to his wife, Paris.

"In the name of Jesus Christ Amen ... We invaded Dusseldorf tonight," said the deeply religious Fury.

"I felt a lot more love from them (his fans) then I felt for him (Klitschko) from his.

"It was a tough task coming here, that's why he's avoided me for the last five years.

"People can say what they want about me, he was hanging on for dear life in that fight all the way through.

"He's been a great champion, but every good dog has its day.

"This is that start of a new era. I'll be the most charismatic champion since Muhammad Ali."

"Nobody believed he could do it, only me, Peter and his brother," Tyson's father John Fury told the BBC.

"We've ripped these belts off a super champion. We have changed the world.

"They never believed the Titanic would sink but it did."

This was a poor display by Klitschko who finished with cuts to both cheeks while Fury was unmarked.

"I must admit that Tyson Fury was faster and better," Klitschko told German broadcaster RTL.

"The speed was missing, for a big man he is incredibly agile.

"I didn't put the punches in and could not find the right key to open up the fight."

Klitschko said he will "definitely" use the option of a rematch, which is in the fight contract.

The bout took place at the second attempt as the original October date had to be scrapped after Klitschko suffered a calf injury.

After Fury had problems with ill-fitting gloves in the week leading up to the fight, there was plenty of tension in the build-up on Saturday.

Fury's management insisted the canvas was too soft and after much discussion and threats to call off the fight, Klitschko's camp relented and removed some of the foam padding from the ring floor.

Then Klitschko was reported to have had his fists wrapped without an observer being present, a no-no in boxing, and when Fury's camp complained, the champion's fists were re-strapped which briefly delayed the start of the fight.

But Fury backed up his numerous pre-fight taunts and even sang "I'll be the one with all the belts" to Klitschko last Wednesday when he modified the lyrics to Bette Midler's "Wind Beneath my Wings" -- a prediction that came true.