Neeraj Goyat, Gaurav Bidhuri and Dilbag Singh have thrown their hats for AIBA's Olympic Qualifying Tournament in Venezuela from July 3 to 8. 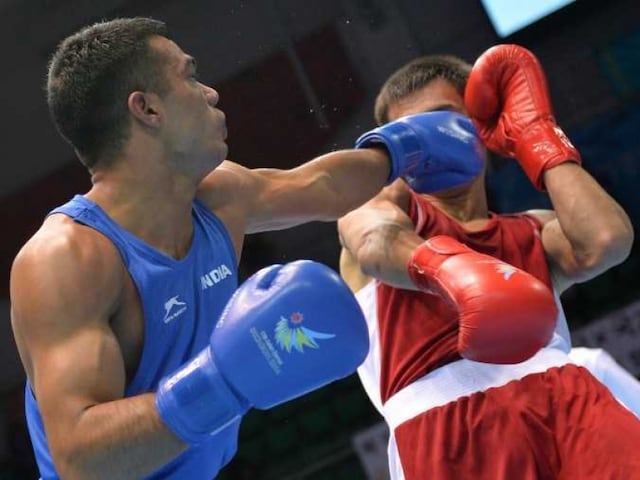 Vikas Krishan (left), who has also fought in pro boxing, has qualified for the 2016 Rio Olympics.© AFP

Three Indians, including WBC Asian title-holder Neeraj Goyat, have registered for the International Boxing Association's (AIBA) Olympic Qualifying tournament for professional boxers scheduled to be held in Venezuela from July 3 to 8.

Neeraj, who will be defending his WBC title next month, will compete in the welterweight 69kg division as no Indian boxer has qualified in this category.

"Yes, I have registered for the AIBA pro event in Venezuela," Neeraj told PTI.

Gaurav Bidhuri (52kg) and Dilbag Singh (81kg) have also thrown their hats in the fray.

"I have completed the registration for the event and I hope to make the Olympics from there," said Gaurav, who is eligible for the event owing to his participation in the AIBA-backed semi-professional World Series of Boxing (WSB), where he won four and lost an equal number of bouts during his stint.

While Bidhuri will definitely get to compete in the Venezuela tournament as his weight division does not have any Olympic qualified boxer from India, Dilbag's participation will hinge on the fortunes of Sumit Sangwan (81kg) in the ongoing AIBA World Qualifiers in Baku, Azerbaijan.

Sumit lost in the quarterfinals of the event last night but if his opponent -- top-seeded Russian Petr Khamukov --wins the gold medal, he would make the Rio cut as a lucky loser.

The tournament in Venezuela is the final Olympic qualifying event and will only feature boxers with experience in the professional circuit. The participants will include those from WSB and the AIBA Pro Boxing Tournament along with other pro boxers from around the world.

Vikas Krishan (75kg) had also qualified for this tourney by fighting in two AIBA Pro Boxing bouts but he won't be competing in Venezuela as he has booked his Rio ticket through the ongoing World Qualifiers in Baku.

The tournament was opened to pro boxers from all over after the AIBA's extraordinary congress voted overwhelmingly earlier this month for allowing pros in the Olympic arena.

The decision has been met with mixed response and several boxing promoters have threatened to punish pros who decide to compete in Venezuela.