Mandeep (69kg) defeated Ahmad Al Naboudhe of Lebanon in a lop-sided contest that had to be stopped midway due to the Indian's domination. 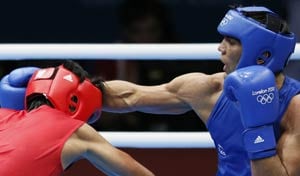 The Indians, making their debut at the event, competed under the International Boxing Association (AIBA) flag due to the country's provisional suspension but nonetheless made a strong statement at the event.

Manoj (64kg) defeated Frank Urquiaht of Spain in splendid fashion to advance into the semi-finals of the event. The 26-year-old dominated the bout and stunned the audience.

The Olympian went on to beat his Spanish rival 15-13. He will now take on Diaa Twafeek Mohamed of Egypt in the semis.

Mandeep (69kg) defeated Ahmad Al Naboudhe of Lebanon in a lop-sided contest that had to be stopped midway due to the Indian's domination.

Meanwhile, playing his first international tournament, another national champion Jagroop Singh (81kg) put in a power-packed performance against Ahrahim Ibrahim from Egypt, who retired hurt in the second round.

All the three boxers are now assured of at least a bronze medal.

However, there was some disappointment as well with Olympic quarter-finalist L Devendro Singh (49kg) losing in his very first bout, against Fussi Mohamed of Algeria.

Pugilists from three continents and 10 countries, including Germany, Spain, Algeria, Egypt and Belgium are participating in the event.