Indian boxers fetched their best ever medal haul of 15 at the Asian Boxing Championships in Dubai, two more than their previous best performance. 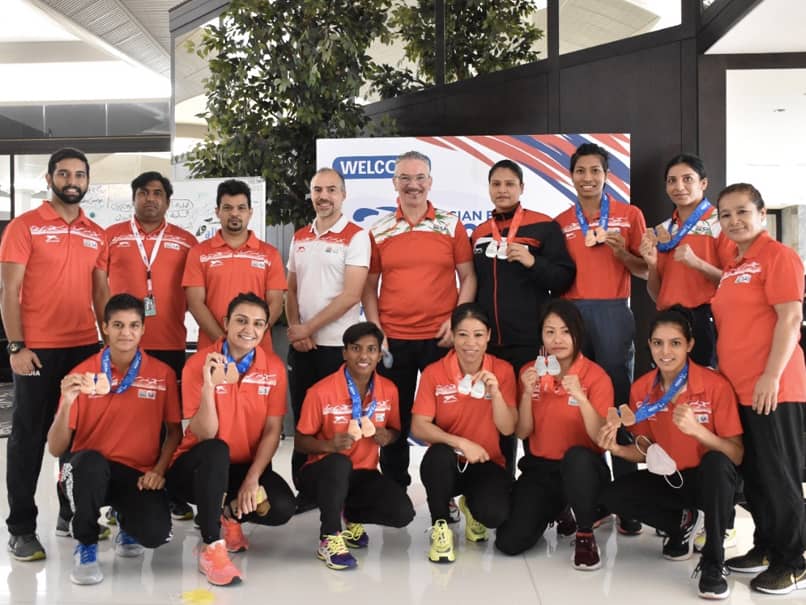 India's nine Olympic-bound boxers will travel abroad for a three-week training stint after getting a few days' break following a record-shattering medal haul by the country's pugilists at the just-concluded Asian Boxing Championships in Dubai. Speaking to PTI, Indian men's boxing's High Performance Director Santiago Nieva said the boxers will reach Tokyo for the Games, five to seven days before the start of the event from July 23. "We will go abroad for training. The discussions are on and the place will be finalised in the next few days. It will be a three-week camp. We will come back to India to fine tune a few things, and then head to Tokyo five-seven days before the Games," Nieva said laying down the plan for the coming days.

The complete modalities of the planned trip will be revealed after the venue is finalised. The Indian boxing team has travelled quite a bit in the past few months for tournaments and training, including a lengthy trip to Europe.

The training at home has been sporadic because of the threat posed by COVID-19. In fact, in April, national coach CA Kuttappa had tested positive for COVID-19 forcing him into quarantine for 10 days.

Indian boxers fetched their best ever medal haul of 15 at the event in Dubai, two more than their previous best performance. The medals clinched this time included two gold, five silver and eight bronze medals.

The only gold-winner among the Olympic-bound was Pooja Rani (75kg), while MC Mary Kom (51kg) and Amit Panghal (52kg) fetched silver medals.

The lone male boxer to fetch a gold was Sanjeet (91kg), who is not a part of the Olympic group. Vikas Krishan (69kg), Simranjit Kaur (60kg) and Lovlina Borgohain (69kg) were among the Olympic-bound bronze-medallists.

The others to have made the cut for Tokyo are Manish Kaushik (63kg), Ashish Chaudhary (75kg) and Satish Kumar (+91kg). Of these, Ashish lost in the quarterfinals in Dubai and Manish and Satish could not travel due to illness.

"Overall I am satisfied with the performance and I say this not just looking at medal haul. Amit was in terrific form, Vikas was just unlucky to get injured in the semifinals and Ashish also gave a good performance even though he didn't win a medal," Nieva said.

"Of course there are small issues to be addressed, more specific to individuals and we will do that in the few weeks remaining before the Games. I can say we are 80 per cent ready, we will sort the remaining 20 per cent," he added.

"There is certainly vast improvement and it will continue before we are absolutely ready for the Games," he said.

On to individual performances and Nieva felt Panghal was incredibly good throughout despite missing out on a second successive gold.

The diminutive Haryana-boxer lost an edge-of-the-seat final to old foe Shakhobidin Zoirov of Uzbekistan in what was a repeat of the 2019 world championship final, which had also ended in Zoirov's favour.

The Indian won the two of the three rounds but Zoirov had just the right combination of scores from individual judges to scrape through 3-2.

"I think this is at par with his best performances. He was unstoppable and looked really good. We all thought he won that final," Nieva said.

And then there was Sanjeet (91kg), who upstaged Olympic silver-medallist and tournament legend Vassiliy Levit in the finals. Kazakhstan's Levit was looking good for his fourth gold medal at the event but was stopped by the tournament-debutant Indian.

"Sanjeet has tremendous positive energy. He has worked hard to get where he is and his improvements are very clear. There were certain weaknesses in his game, especially at close range but he has improved quite a lot," Nieva said.

India found its own tournament legend in Shiva Thapa (64kg), who clinched fifth successive medal by finishing with a silver. Nieva was all praise for the Assam boxer, who is also a world championship bronze-medallist.

Comments
Topics mentioned in this article
Mary Kom Amit Panghal Boxing
Get the latest updates on IPL 2021, IPL Points Table , IPL Schedule 2021 , live score . Like us on Facebook or follow us on Twitter for more sports updates. You can also download the NDTV Cricket app for Android or iOS.