Floyd Mayweather Jr Says There Is Nothing Else to Accomplish

Floyd Mayweather Jr, who defeated Andre Berto in Las Vegas to end his career with a perfect 49-0, confirmed that it was time to quit as there was nothing else to accomplish. 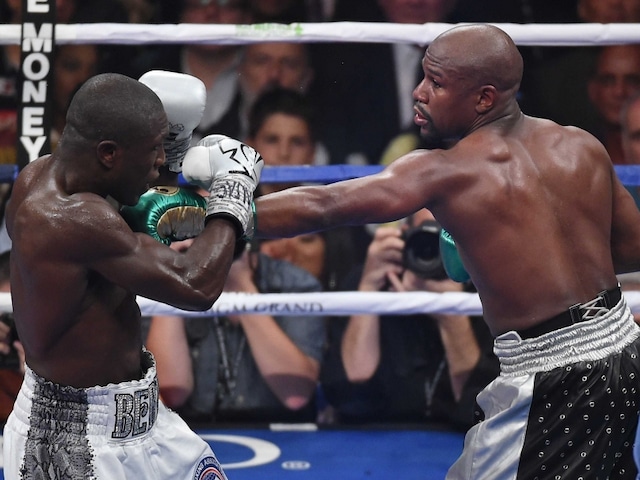 Floyd Mayweather, who has been world champion for 18 years, announced his retirement after defeating Andre Berto in Las Vegas.© AFP
Las Vegas:

Floyd Mayweather Jr equaled Rocky Marciano's perfect 49-0 record on Saturday and then confirmed that now was the time to quit - because he has nothing else to accomplish. (Floyd Mayweather Beats Andre Berto And Says Its Over)

The unbeaten pound-for-pound king, 38, showcased some of his brilliant best in easily outpointing a game Andre Berto at the MGM Grand in Las Vegas. (Floyd Mayweather Rivals Doubt Retirement Talks)

Pundits and rivals in the welterweight division said before the fight that they believed Mayweather, the highest-earning sportsman in the world, would carry on to go for the magic 50-0.

Critics accused Mayweather of bigging up the quit talk to sell tickets for a fight against a rank outsider that had failed to capture the public interest.

But Mayweather - widely acknowledged as the best boxer of his generation - was adamant it was time to let someone else grab the limelight.

"I've been in this sport 19 years, been a world champion 18 years, broke all the records," he said, moments after collapsing to his knees in the middle of the ring.

'Records are to be broken'

"My 49-0 record is a part of boxing. Records are made to be broken," added Mayweather, who has retired once before.

"Hopefully someday we can find the next Floyd Mayweather. Now it's time to spend time with my family and children, make sure they get the proper education.

"I'm leaving the sport with all my faculties; I'm still sharp and smart. I've accomplished everything in this sport, there's nothing else to accomplish."

Mayweather, who says he made at least USD 70 million from the bout, reiterated his belief that he is the "best ever" because he is always "one step ahead of any fighter."

"I've had a great career. Very comfortable, made great investments - I am OK," he told a press conference where he was in effusive mood and talked at length about his career and plans for the future.