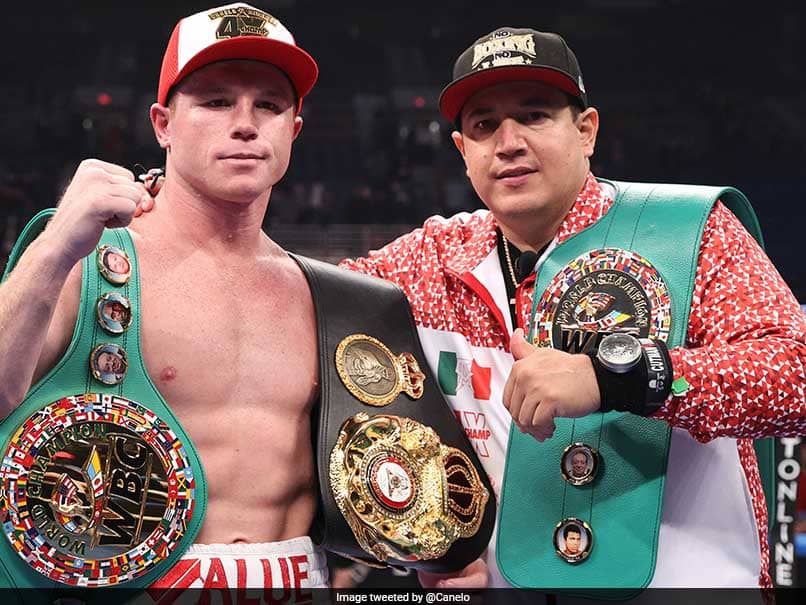 Mexican pound-for-pound champ Saul 'Canelo' Alvarez ended the longest layoff of his career on Saturday, brutally overpowering the previously unbeaten Callum Smith to capture two super middleweight titles with a unanimous decision in Texas. Three-division champion Alvarez claimed the vacant WBC title and Briton Smith's WBA version of the 168-pound belt, overcoming a stark height difference as he moved up in weight class for the fight in front of a pandemic-limited crowd at the Alamodome in San Antonio. "I feel really proud to have this," Alvarez said. "I represent not only the boxing world but my country. I did a great job after a 13-month layoff.

Alvarez improved to 54-1-2 with 36 knockouts, while Smith suffered the first defeat of his pro career and dropped to 27-1, 19 knockouts.

Saturday's victory rekindles the possibility of a third fight between Alvarez and Gennady "GGG" Golovkin, who lost to Alvarez in a controversial majority decision in Las Vegas in 2018.

The 30-year-old Alvarez showed he is one of the smartest fighters in the sport, adjusting on the fly and managing to get inside the long reach of Smith to attack the body and head.

"I felt great at 168 pounds. This is one of the best nights for me," said Alvarez.

Because of the Covid-19 pandemic, that has killed 315,000 people across the US in the past 11 months, organizers were forced to limit the crowd size but they still managed to get a permit to allow 15,000 people into the 32,000-seat venue.

They saw Alvarez, who goes by the nickname "Canelo", land every punch in his arsenal during the glorified sparring session with Smith whose busted up face and blood-spattered white trunks told the story.

Alvarez's best punch was the right uppercut and he threw it with authority, imposing his will like he was chopping down a tree. His best round was the ninth when he almost knocked Smith down -- the ropes the only thing holding the champ up.

The opening rounds were uneventful but Alvarez picked up the pace in the fourth landing solid combinations and doing the first bit of damage with the uppercut.

Alvarez bloodied Smith's nose and almost knocked him down with 84 seconds to go in the ninth, but the Englishman survived the round.

Smith avoided Alvarez in the final round repeatedly looking up at the clock in a bid to finish the fight on his feet. Alvarez tried for a knockout as the crowd booed Smith for clinching and not throwing punches.

"Since the first round I tried to see what he brings, his skills, whatever. But I showed what I am," Alvarez said

This was Alvarez's first fight since he jumped up to light-heavyweight to score an 11th round knockout of Sergey Kovalev in November 2019.

The last time Alvarez fought in the 168-pound division, he destroyed another Englishman, Rocky Fielding, with a third-round stoppage in December 2018.

Smith was hoping to avenge the defeat suffered by his elder brother, Liam Smith, against Alvarez in 2016. Liam was at his brother's side on Saturday to watch the fight.

Alvarez said that "GGG" Golovkin was now in his sights.

On Friday, Golovkin knocked down Kamil Szeremeta four times in a seventh-round stoppage of the overmatched Polish challenger to retain his IBF world middleweight title and move closer to a big money trilogy fight.

"I want all the belts," Alvarez said. "I don't run from nobody. I just showed I fight the best. If he (Golovkin) wants the fight I will take it."