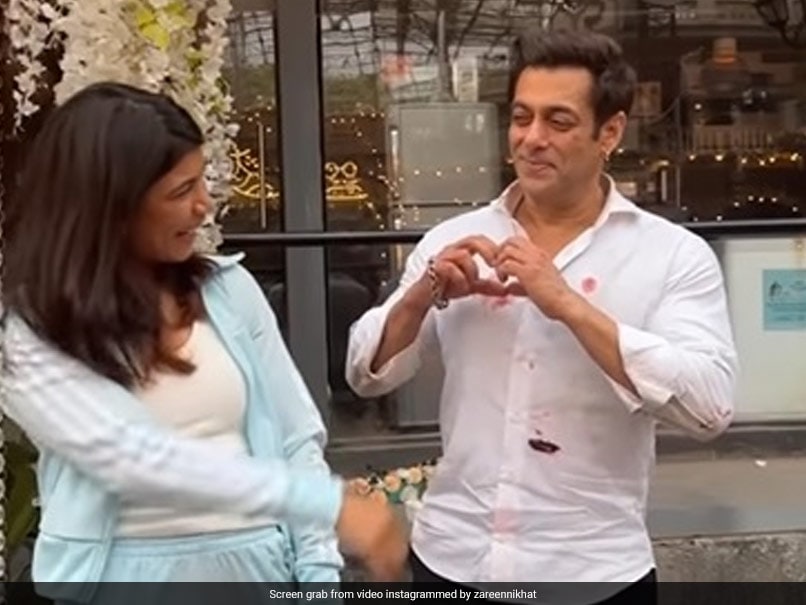 World champion boxer Nikhat Zareen is an avid fan of Bollywood superstar Salman Khan. In May, after winning the gold at World Boxing Championship, Nikhat, in an interview to NDTV had said: "Logo ka bhai hoga, woh toh meri jaan hai. Salman, I am his huge fan. It's my dream to meet him. My dream is to first win the Olympic medal and then go directly to Mumbai and meet Salman Khan." The superstar also responded to the video. "Congratzz on this gold Nikhat… @nikhat_zareen," wrote Salman on Twitter. Now the duo has created an Insta reel that has gone viral. In the video, they can be seen dancing to the song 'Saathiya yeh tune kya kiya' from Salman's 1991 movie 'Love'.

Commonwealth Games light flyweight champion Nikhat Zareen will continue to ply her trade in 50kg weight categorytill the 2024 Paris Olympics. For the CWG, Zareen dropped down from 52kg, in which she won the world championship in May to 50kg to assess how her body adapts to the lower weight class.

"I prefer losing weight and boxing in lower weight categories, so I will continue in this category," Zareen told PTI in an interaction.

In the absence of her preferred 52kg weight division in the Paris Olympics, the 26-year-old is facing with a dilemma of either moving down to 50kg or climbing up to 54kg.

However, after her dominant display at the CWG that saw her winning the gold in her maiden appearance, it seems that the 2019 Asian Championships bronze medallist is at ease with her new weight class.

"It's (the win) very important for me as it has come in a new category. I had to work harder for this to cut down two kilograms and at the same time not letting up the speed and power," she said.

"The competition here was not close to the one I had at the World Championships. But for me, it was a new experience for me (weight category). I was confident of doing well. But you never know how it pans out in the ring." Having become a household name after her spectacular World Championship win, the expectations on Zareen to return with a gold medal from Birmingham were high.

"There were a lot of expectations on me after winning the World Championships, no doubt about that."

After Defeat Against Poland, Saudi Arabia Fans Are Supporting Their Team In This Fashion
Comments
Topics mentioned in this article

Nikhat Zareen Boxing
Get the latest updates on Fifa Worldcup 2022 and check out  Fifa World Cup Schedule, Stats and Live Cricket Score. Like us on Facebook or follow us on Twitter for more sports updates. You can also download the NDTV Cricket app for Android or iOS.