Nine men and 10 women will compete for India at the Asian Boxing Championships that get underway in Dubai on Monday. 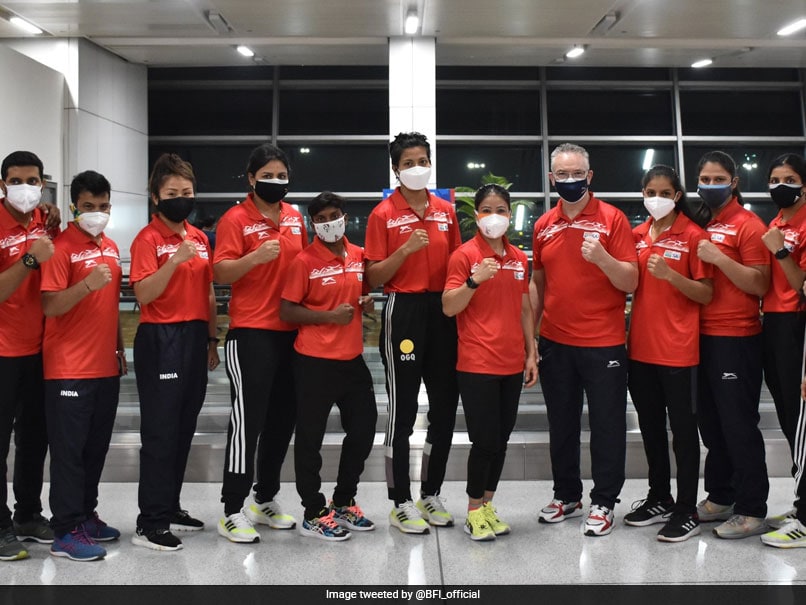 Indian boxers landed in Dubai on Saturday for the Asian Boxing Championships.© BFI/Twitter

A crucial test of preparations for Olympic-bound boxers, the Asian Championships get underway, on Monday with India already assured of podium finishes after seven women boxers entered the semifinals due to the small size of their respective draws. Six-time world champion M C Mary Kom (51kg), seeded top in her category, defending champion Pooja Rani (75kg), Anupama (+81kg), Saweety (81kg), Lovlina Borgohain (69kg), Lalbuatsaihi (64kg), and Monika (48kg) made the last-four stage when draws were unveiled on Sunday. The total women's participation in this edition is 47 boxers across 10 weight categories.

In all, 19 Indian boxers -- nine men and 10 women -- will stake their claim for the top honours, which will also come with an unprecedented bonus of prize money this time.

A total of 27 countries were expected to participate but that shrunk to 17 on Sunday due to COVID-forced travel restrictions. Heavyweights like Uzbekistan, Philippines and Kazakhstan are among those in contention.

A total of six Indian male boxers, including defending champion Amit Panghal (52kg), got first-round byes into the quarterfinals.

The boxers reached on Saturday after a tumultuous few hours, which included a delayed landing and some confusion over approval paperwork. In addition, the team had to withdraw South Asian Games gold-medallist Vinod Tanwar's (49kg) name after he tested positive for COVID-19.

The build-up and the subsequent journey seemed symbolic of the Indian boxers' Olympic preparations this year with COVID-19 disrupting training on several occasions.

"This will give us a good sign as to where we stand before the Olympics and where we need to adjust. It would be good for us that way," Indian men's boxing's High Performance Director Santiago Nieva told PTI.

India had delivered its best ever Asian Championship performance in the 2019 edition in Thailand, claiming 13 medals, including two gold, four silver and seven bronze. This time too, expectations are high.

"We always come to win. We know it will be a very tough competition with many nations featuring Olympic qualified boxers and many medal winners from the world championships. But we are confident that our team will bring home a good results," Nieva added with confidence.

From the Olympic-qualified group, defending champion Amit Panghal (52kg), last edition's silver-winner Ashish Kumar (75kg) and past medallist Vikas Krishan (69kg) will be the ones spearheading the men's challenge.

Among the women, six-time world champion M C Mary Kom, who has won five gold medals in this event in the past, along with Simranjit Kaur (60kg), Lovlina Borgohain (69kg) and defending champion Pooja Rani (75kg) will be the strong medals bets. All four are bound for the Tokyo Games.

And this time, the International Boxing Association has also announced a prize fund of USD 400,000 for the event.

The tournament, which was originally planned in India but shifted to Dubai because of the COVID-19 pandemic, will award USD 10,000 to gold winners.

For silver-medallist, the prize money is USD 5,000 and for both bronze medallists, it is USD 2,500 each.

Comments
Topics mentioned in this article
Mary Kom Amit Panghal Boxing
Get the latest updates on ICC T20 Worldcup 2022, check out the Schedule and Live Score. Like us on Facebook or follow us on Twitter for more sports updates. You can also download the NDTV Cricket app for Android or iOS.