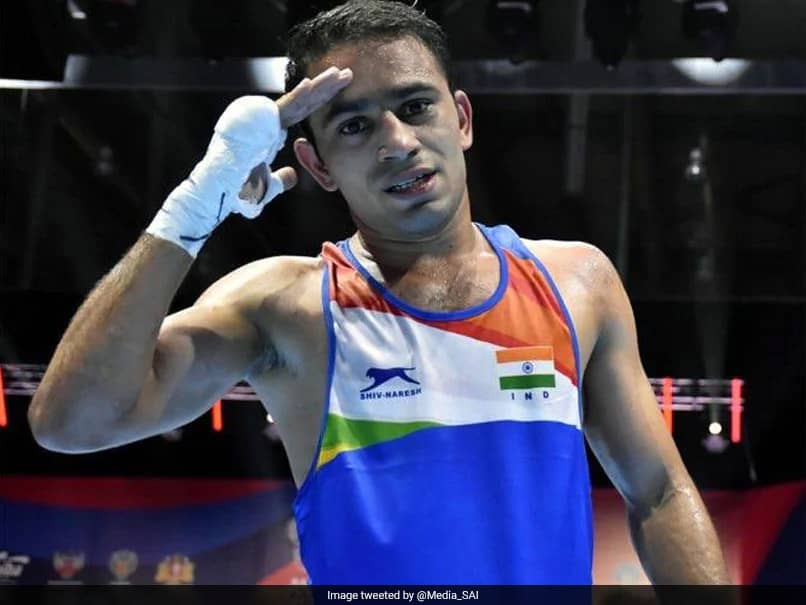 Amit Panghal has not won any national sports award.© Twitter

World silver-medallist Amit Panghal and the seasoned Vikas Krishan were on Monday nominated for the Rajiv Gandhi Khel Ratna award by the Boxing Federation of India, which picked only Olympic-bound names as its nominees for the annual honours. The BFI has nominated world bronze-winning trio of Lovlina Borgohain (69kg), Simranjit Kaur (64kg) and Manish Kaushik (63kg) for the Arjuna awards. Of these, Borgohain has won the world bronze twice, the most recent being last year.

For the Dronacharya awards, the BFI has finalised the names of national women's coach Mohammed Ali Qamar and assistant coach Chhote Lal Yadav.

"The nominations of the athletes and coaches have been on the basis of their performance during the last four years," the BFI said.

The 24-year-old Panghal (52kg), also an Asian Games champion, has not won any national sports award. He was being nominated for the Arjuna award for the past three years but was not considered by the selection committee because of a 2012 "inadvertent" dope offence.

"He is allowed to compete for the country and his medals are celebrated. He deserves to be honoured as well," BFI Executive Director R K Sacheti told PTI.

Last year, the BFI had vowed to keep nominating him till the time his name was considered. The doping violation took place when Panghal was undergoing treatment for chicken pox in his youth category days.

"Youth level ki galtiyan to sab jageh maaf hoti hain. I didn't do it intentionally. I only took a medicine prescribed to me without knowing the consequences. I am hopeful I will be considered," Panghal had told PTI in a recent interaction.

He had also written to Sports Minister Kiren Rijiju, demanding a change in the selection procedure of the awards, calling for an end to self-nomination and the process of having a committee pick the winners.

He described the current system as discriminatory and said that the ministry should be able to decide winners on its own as athletes' achievements are out in the public domain.

Commonwealth and Asian Games gold-medallist Krishan (69kg) won the Arjuna award in 2012. The 28-year-old had turned professional in 2018 after his CWG top finish followed by a third Asian Games medal -- a bronze.

He returned to the amateur circuit last year with the South Asian Games, winning a gold there before qualifying for the Olympics at the Asian qualifiers in Jordan in March this year.

Of the three Arjuna contenders, Kaushik has had a great run for the past couple of years, winning a bronze in his maiden world championship (2019) to qualify for the Olympics after a silver at the 2018 Commonwealth Games.

Both Kaur and Borgohain booked their Tokyo tickets at the Asian qualifiers.

Qamar, an Arjuna awardee, was India's first Commonwealth Games gold-medallist in boxing and has been in charge of the women's camp for over a year now. This was after serving as an assistant coach for one year.

Yadav is closely associated with six-time world champion MC Mary Kom and she has been crediting him for keeping her focussed in the past couple of years.

Former world-medallist N Usha has been nominated for the Dhyan Chand award for lifteime contribution to sports. June 3 is the last day for filing nominations.

Comments
Topics mentioned in this article
Amit Panghal Boxing
Get the latest updates on India vs Australia Series, check out the India vs Australia Schedule for 2020-21 and Ind vs Aus live score . Like us on Facebook or follow us on Twitter for more sports updates. You can also download the NDTV Cricket app for Android or iOS.