Kobe Bryant, NBA legend, delivered a Hollywood ending as the curtain came down on his glittering 20-year NBA career on Wednesday in a fairytale finale 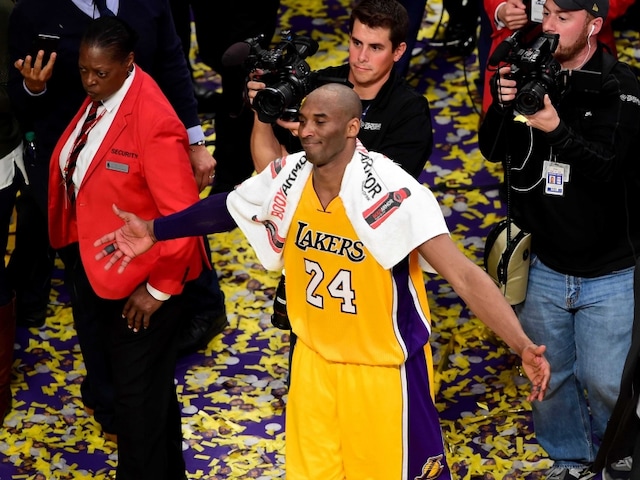 Kobe Bryant spent 20 seasons with the LA Lakers, the most for one player with one team in NBA history.© AFP

Kobe Bryant signed off from the NBA with a mammoth 60 points, including a final burst of scoring to inspire LA Lakers to a 101-96 victory over the Utah Jazz.

Bryant by the numbers after the Los Angeles Lakers superstar brought down the curtain on his 20-year NBA career on Wednesday: (Bryant Ends Stunning NBA Career as Hollywood Claps)

8: First jersey number as a Laker, worn for his first decade in the league until he switched to 24.

10: Number of coaches in 20 seasons, including two stretches with Phil Jackson

12: Three-pointers made in a January 7, 2003 game against Seattle, an NBA record since equalled by Golden State's Stephen Curry.

13: Overall selection by the Charlotte Hornets in the 1996 NBA Draft. He was traded to the Lakers 15 days later.

15: All-Star Game starts, the most in history.

20: Seasons with the Lakers, the most for one player with one team in NBA history.

323.3: Million dollars, Bryant's cumulative salary since his NBA debut, including $25 million for his final season.

Comments
Topics mentioned in this article
Basketball Kobe Bryant NBA Los Angeles Lakers
Get the latest Cricket news, check out the India cricket schedule, Cricket live score . Like us on Facebook or follow us on Twitter for more sports updates. You can also download the NDTV Cricket app for Android or iOS.