World champion Chen Jin became the second big name to be shown the door at the All-England Open when he suffered a startling second round collapse on Thursday. 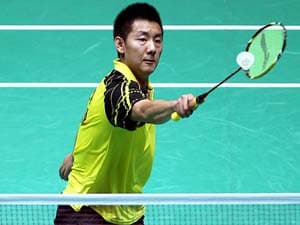 World champion Chen Jin became the second big name to be shown the door at the All-England Open when he suffered a startling second round collapse on Thursday.

The player, who had looked so solid while producing his greatest triumph seven months ago in Paris, unaccountably crumbled after achieving a second game lead of 18-11 against Marc Zwiebler, slipping to a 21-18, 22-20 defeat.

It was a good opportunity missed because the shock defeat of Taufik Hidayat, the second seeded former Olympic champion from Indonesia, had opened up a path to the semi-finals for the sixth-seeded Chen.

But just as he was turning the match around he somehow lost his feel, mistakes flowing from his racket, and it allowed a surprisingly relaxed and inspirational opponent to snatch the advantage back.

"I didn't expect to lose," Chen said. "But I was not in good form today.

"I don't know what happened. I played really bad, especially with my overhead shots."

Unseeded German Zwiebler, who has been ill and did not feel in his best shape, admitted that he thought the second game was a lost cause and was already thinking about conserving energy for the third.

"But suddenly I started winning points, and when it got close I think he got nervous," said the Bonn native.

The world number 16 celebrated by hurling his racket into the crowd -- for which he was given a warning by the umpire.

But it means Zwiebler now has to delay a holiday he had planned to take tomorrow in Florence with his sister.

Instead he would now like to give himself a present of a place in Sunday's final, which falls on his 27th birthday.

To achieve that he must first get past a quarter-final with Kazushi Yamada, the young Japanese who ousted Hidayat.

Chen's compatriot Lin Dan, the four-time former champion, had no such problems, winning in straight games for the second evening.

Gade did that by saving four crucially important second game points from 16-20 down to win 21-9, 22-20 against Kenichi Tago, the dangerously improving young Japanese player who sensationally reached last year's final.

It meant that Gade both conserved precious energy and found his physical condition is not as bad as he feared when he entered the tournament carrying right knee and left foot injuries.

"I came into the All-England a bit insecure about my game, so I am pretty pleased with this," Gade said.

"I have a lot of respect for him as he is one of the stars of the future. I like that very much.

"It was important to finish the match off as I came into the tournament a bit insecure about where my game was."

An angry Lee Chong Wei walked out without talking to journalists after receiving the shortest of warnings of his impending second round match.

The defending champion from Malaysia only had an hour's notice of his 1000GMT match with China's Bao Chunlai, and had to hurry from his hotel and compete without proper preparation.

These upsetting preliminaries made it all the more creditable that Lee achieved a 21-16, 21-16 victory over the dangerous Bao, who was within one point of reaching last year's final.

There was also a hint of controversy when both the all-Chinese women's singles failed to materialise.

Top seed Wang Shixian was given a walk-over by her team-mate Liu Xin, who complained of a fungal big toe.

Then Wang Xin, the third-seeded world runner-up, was also allowed to pass into the third round without wasting any energy.