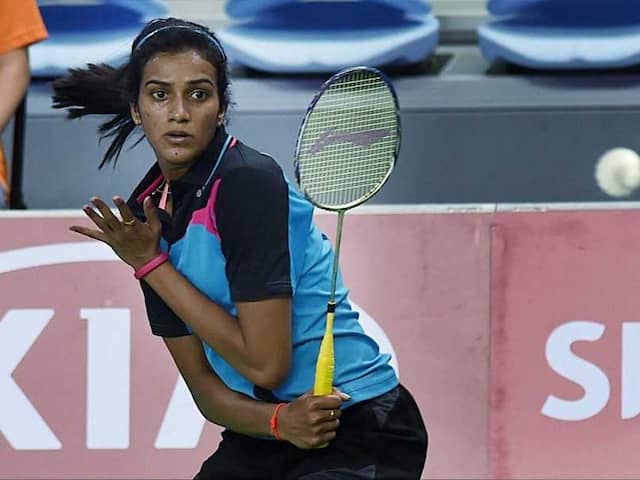 India's star shuttler PV Sindhu, seeded second, suffered a 15-21, 18-21 defeat to fourth seed Nozomi Okuhara of Japan in straight games inside 50 minutes to settle for runners-up spot in the Thailand Open at the Nimibutr Stadium in Bangkok on Sunday. Sindhu was outplayed in the first game in 20 minutes as the World No.3 made too many unforced errors. However, Sindhu came out all guns blazing in the second game and opened up a healthy lead. But she fell prey to Okuhara's aggression and yet again made unforced errors to throw away her lead. The Japanese came back on two occasions to take the game away from the reach of Sindhu and deny the Indian another title.

16:49 IST: Its over! Second seed P.V Sindhu loses 15-21, 18-21 to fourth seed Nozomi Okuhara in the Thailand Open women's singles final. The star Indian shuttler, who failed to look in rhythm barring a few minutes in the second game will settle for the runners-up spot. Thank you, for joining us on all the action, until next time, it's goodbye!

16:40 IST: P.V Sindhu has lost all her challenges, poor judgement as he now trails 12-14. Sindhu initially thought the shuttle kept out, but the review showed otherwise.

16:37 IST: Post-interval, Okuhara pulls two points back as she equals 11-11. Sindhu looks to have lost the rhythm, Okuhara the aggressor.

16:34 IST: Okuhara is not letting Sindhu settle on the lead, she cuts short the deficit as PV Sindhu leads 10-9.

16:32 IST: PV Sindhu puts some daylights as she returns to the lead, 9-7 the second game looks a closely fought one.

16:30 IST: Comeback for Okuhara, from trailing 2-4 she plays a cleaver little shot to take a slender 7-6 lead in the second game.

16:27 IST: Poor judgement from Sindhu, gives a point away to Okuhara. The star Indian shuttler initially thought the shuttle might land outside the mark. Sindhu leads 6-4.

16:25 IST: Back-to-back points for P.V Sindhu, she now leads 5-1 in the second game. We might see a three-game thriller here.

16:22 IST: P.V Sindhu serves the second game, gets a smash wide off Okuhara to take the opening point as well. Sindhu leads 2-0.

16:16 IST: P.V Sindhu puts Okuhara's defensive skills under test, as the Japanese fails to grab a point but maintains the lead 17-15.

16:14 IST: Okuhara brings her back hand into play, plays it wide as she leads 15-11 in the opening game now. Extra-pressure building on Sindhu.

16:12 IST: Okuhara nets one, unforced error, easy picking these for Sindhu as she trail 10-12 in the opening game.

16:07 IST: P.V Sindhu challenges, but it has been ruled unsuccessful. Okuhara leads 9-5 now.

16:06 IST: 23 Shots Rally, surely a match that will consist of these long rallies. We have seen two, in the opening game already. Okuhara leads 7-5 to Sindhu.

16:04 IST: P.V Sindhu pulls two back, Okuhara 6-4 Sindhu. The second point came off a perfectly directed smash out of the reach of Okuhara.

16:02 IST: Back-to-back points for Okuhara, she takes 5-2 lead in the first game from unforced errors of the second seeded Indian.

15:20 IST: Men's singles final have moved into a third game decider after Indonesian Tommy Sugiarto comes from behind to clinch the second game 21-13 against Tsuneyama.

14:40 IST: The Women's Singles Final will be followed by the ongoing match between Japan's Kanta Tsuneyama and Indonesia's Tommy Sugiarto. Expect around half an hour for P.V Sindhu and Nozomi Okuhara to take on the centre stage, if the men's singles final does not heads to a three-game thriller.

13:50 IST: Head-to-head, Japan's Nozomi Okuhara ranked eighth and India's P.V Sindhu ranked third have won 5 matches each in the tally. Someone has to take a foot forward, take a slender lead in the tally to clinch the Thailand Open today.

13:40 IST: Hello and welocme to live commentary from the Thailand Open Final between India's P.V Sindhu and Japan's Nozomi Okuhara.

In the second game, Sindhu continued from where she left as opened up a 9-5 lead. But the gutsy Indonesian came up with a seven-point streak to not only pull level at the nine-point mark but also to hold a 12-9 lead. After Sindhu earned a point, Greogria enjoyed another brilliant phase as she bagged four consecutive points which gave her a 16-10 lead before pocketing the second game 21-16.

Sindhu, however, turned the heat in the third game. Starting strongly, she raced to a 5-1 advantage before Gregoria fought valiantly to reduce the gap to one point with the Indian leading 8-7. Having put in so much of effort, Gregoria looked tired and lacked energy as Sindhu went on a roll by pocketing 10 successive points. An 18-7 lead for Sindhu almost sealed the Indian's path to the final as she sealed the third game 21-9.

However, Sindhu faces a tough battle in the final against Okuhara, defeated United States seventh seed Beiwen Zhang 21-17, 21-10 in 34 minutes in the other semi-final. Prior to Sunday's final, three-time World Championship medallist Sindhu and 2016 Olympic bronze medallist Okuhara have fought 10 times in their careers, with both winning five times each.