Newly married Lin Dan was returning after almost a year on the sidelines to spend time with his family and entered the world badminton tournament on a controversial wildcard because of his fan appeal, a move criticised by Lee Chong Wei. 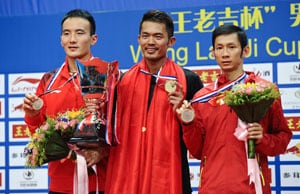 Fans had been hoping for another classic final between the two badminton legends, with Lee gunning for his first world title in the southern Chinese city of Guangzhou.

But it was Olympic champion Lin who took the world men's singles gold for the fifth time as Lee's dreams of victory against his nemesis were shattered in the third game, with the umpire announcing he was retiring injured down 20-17.

He was taken to hospital due to cramp, according to a spokeswoman for badminton's world body the BWF.

"Both Chong Wei and I gave an excellent performance to the fans," Lin said.

"He got this cramp out there and it reminded me of my training -- when you have that, you cannot move at all. From that moment we were not opponents any more. I really wanted to help and I went over to ask if he was OK. He didn't want to give up."

Newly married Lin was returning after almost a year on the sidelines to spend time with his family and entered the tournament on a controversial wildcard because of his fan appeal, a move criticised by Lee.

"When the coach told me I had a wildcard I was surprised because there were only two months to prepare -- so many people doubted how far I could go because I hadn't played world tournaments for half a year," Lin said

"But today's match shows is your attitude that counts.

"Both of us tried our best -- there is no winner or loser. Badminton is a cruel sport. You don't just need skills and talent, you also need luck." 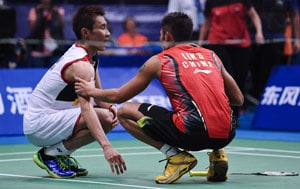 With China's pairs losing in the mixed doubles and men's doubles, Lin said it would have been "embarrassing" if he had not won his match in front of a home crowd.

"If I had lost we would only have won one gold medal and since we are in Guangzhou it would have been embarrassing," he said. "But the good thing is I'm not the head coach."

With the air conditioning off in the second and third games, the temperature in the stadium soared and spectators fanned themselves furiously to cool down.

Players have been complaining about the "drift" of the shuttlecock because of the air conditioning throughout the tournament.

When asked if the lack of air conditioning in the final had given him an advantage, Lin said: "When you fully focus in the match you don't think too much about the atmosphere and the climate. Even if the temperature goes up, we will both sweat the same."

Asked if he had noticed any effect on the shuttle during his clash with Lee he said: "The shuttle is very light so it will be affected by a lot of factors, especially wind and light.

"This kind of impact will not only affect the performance of the players but also the whole quality of the match. Because of that, a lot of players want to play in Europe because of the good light and wind there, which gives them a better performance."