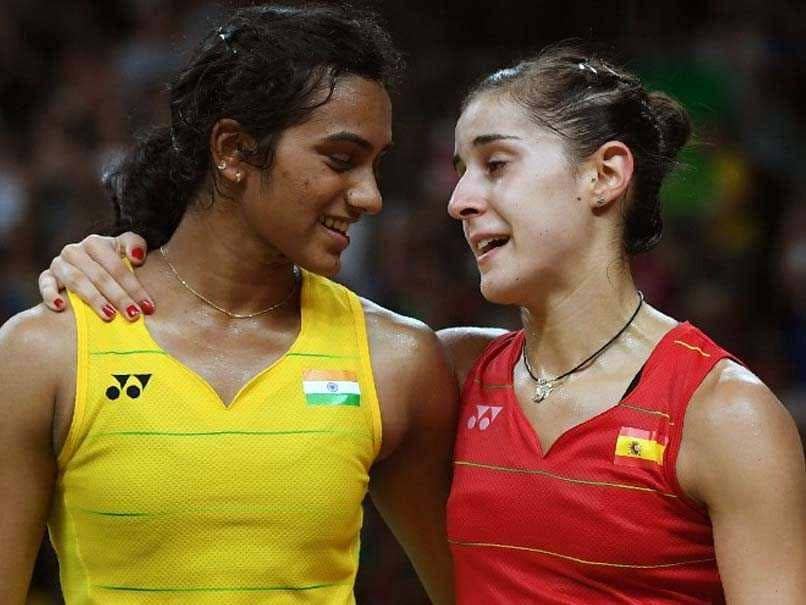 Third seed P.V. Sindhu overcame arch-rival Carolina Marin in straight games to enter the women's single semi-final of the Malaysia Open at the Bukit Jalil in Malaysia on Friday. The star Indian shuttler got better off her counter-part in mere 52 minutes to book herself a place in the last four. The opening game looked neck-in-neck with both Sindhu and Marin coming from behind on couple of occasions but the former kept her nerves to close the game where as in the second game Sindhu dominated from the onset while Marin did well to gather consecutive points but failed to overcome the deficit. Sindhu will face top seed Chinese Taipei Tai Tzu Ying  in the semi-final on Saturday. Earlier, Olympic and world championship silver medallist P.V Sindhu brushed aside the challenge of Malaysia's Ying Ying Lee 21-8 21-14 to set up a clash with Olympic champion and former world no 1 Carolina Marin. The 22-year-old Indian has a 5-6 head-to-head record against the Spaniard. The 2016 Olympic goal medallist Marin in the quarterfinals of the women's singles overcame -- Aya Ohori and Ying Ying Lee in straight sets in the previous rounds.

17:40 IST: Sindhu nets it, leads 20-19 before she plays it wide to book herself a semi-final berth in the second game. Two straight game victory for the third seed Sindhu over her arch-rival Marin 22-20, 21-19. The victory in the second game came in 27 minutes.

17:38 IST: Smash! and Sindhu picks one more, Marin falls in anticipation but fails to reach out to the shuttle 21-17, Sindhu leads.

17:34 IST: After Marin picked 4 consecutive points, Sindhu takes one from a challenge which is ruled in favour of Sindhu, 17-15 as it stands now!

17:30 IST: After conceding three points, Sindhu clinches back one, 14-10 as it stands. Marin challenges but the shuttle clearly stays out, Sindhu further strengthens her lead to 15-10.

17:28 IST: Back-to-back points from Marin, she has cut short Sindhu's lead to 13-10 now. The Spaniard's never-say-die spirit is worth applauding!

17:25 IST: Marin falls heavily on her back while moving backwards in anticipation to the shuttle hit by Sindhu. The third-seed Sindhu has taken a 13-6 lead.

17:24 IST: Back-to-back points for Sindhu, she leads 9-6. Sindhu trying to play with soft hands while Marin on the counter hitting it hard, causing unforced errors. It is 11-6 at the second game breather.

17:13 IST: Sindhu closes the first game 22-20 in 25 minutes. It was evenly-poised but Sindhu keeps her nerves to take it, the quarters can well go on to three-game decider.

17:09 IST: Unforced errors from Sindhu, Marin lead 20-18. But Sindhu has challenged Marin, which goes unsuccessful as reviewed by the referee.

17:08 IST: Marin screams like always, reminds of the 2016 Olympic match against Sindhu. No  signs of letting up by the Spaniard, it's 18-all.

17:06 IST: Sindhu plays it wide, away from the reach of the Spaniard as she takes a three point advantage, 18-15 in the first game.

17:03 IST: Sindhu smash was hit back by Marin bowing down low as he picks up the shuttle and Sindhu causes an unforced error to give her arch-rival a 14-13 lead.

17:00 IST: Sixth seed Marin has dictated the pace so far, she has taken the lead for the first time in the first game. Marin leads 13-11.

16:56 IST: Close contest, 10-all in the early stages as we approach the breather, Marin tries to stretch her knee but fails to get hold off the shuttle, Sindhu leads by a slender margin 11-10.

16:40 IST: Hello and welcome to live commentary from the women's singles semi-final between P.V Sindhu and Carolina Marin.

On Thursday, PV Sindhu and Kidambi Srikanth progressed to the quarter-finals but Saina Nehwal fell in the second round of the Malaysia Open badminton championships on Thursday. Third seed Sindhu defeated Malaysian Ying Ying Lee 21-8, 21-14 in 32 minutes to set-up a quarter-final against 2016 Olympic champion Carolina Marin, who got past Cheung Ngan Yi 24-22, 21-11.

Meanwhile, Saina Nehwal crashed out of the tournament after a loss to world No 2 Akane Yamaguchi. Former world number one Saina suffered a 15-21, 13-21 loss as the match ended in 36 minutes at the Axiata Arena in Bukit Jalil in Kuala Lumpur.

Comments
Topics mentioned in this article
PV Sindhu Carolina Marin Badminton
Get the latest updates on India vs Australia Series, check out the India vs Australia Schedule for 2020-21 and Ind vs Aus live score . Like us on Facebook or follow us on Twitter for more sports updates. You can also download the NDTV Cricket app for Android or iOS.