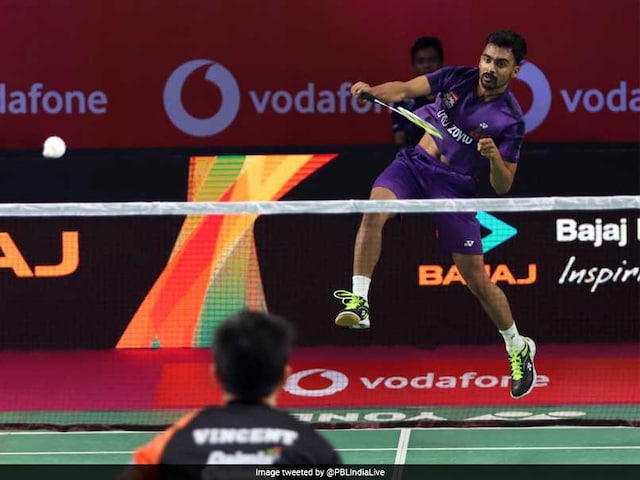 Sameer Verma consolidated Mumbai Rockets' position with a straight-game win over Wong Wing Ki Vincent of Delhi Dashers in the Premier Badminton League (PBL) on Monday. Sameer outplayed the Dashers' Trump player Vincent 15-11, 15-11 to not only fetch the additional point for his team but also pushed the Delhi team into negative territory. Ranked world No. 30, Sameer showed his mastery over the court, covering the angles well and toying with the higher ranked Vincent. His cross-court jump smashes were particularly effective, fetching him points almost at well.

The 23-year-old Indian star wrapped up the first game in less than 20 minutes and seemed on his way to another facile win. But at 14-8, a few nerves surfaced and Vincent pulled back three points. But a perfect net drop gave Sameer a comfortable victory.

Earlier, the South Korean-Malaysian duo of Lee Yong Dae & Tan Boon Heong drew on their vast experience to down the Russian pair of Ivan Sozonov & Vladimir Ivanov 14-15, 15-14, 15-10 in the opening Men's Doubles match.

In an intense battle between near-equals, Yong Dae and Boon Heong struggled against the towering 6 foot 6 inch presence of Ivanov. They failed to ravel his booming smashes and lost the opening game 14-15.

They got into their own in the next though. Despite falling behind midway through the game, they clawed into the contest by tightening their defence.

Yong Dae was particularly impressive, covering the court well and killing the key points smartly. They enjoyed a couple of game points but Sozonov-Ivanov held on to make it 14-14. But they lost the next point to allow Mumbai Rockets an opportunity to assert themselves.

The third game too was tight, with the lead exchanging hands till 5-5.

That's when the Russian pair started making mistakes, repeatedly finding the net in their way. Suddenly, they were down 5-8 and then 7-11. They tried to get back but it was too late.

Comments
Topics mentioned in this article
Sameer Verma Badminton
Get the latest Cricket news, check out the India cricket schedule, Cricket live score . Like us on Facebook or follow us on Twitter for more sports updates. You can also download the NDTV Cricket app for Android or iOS.