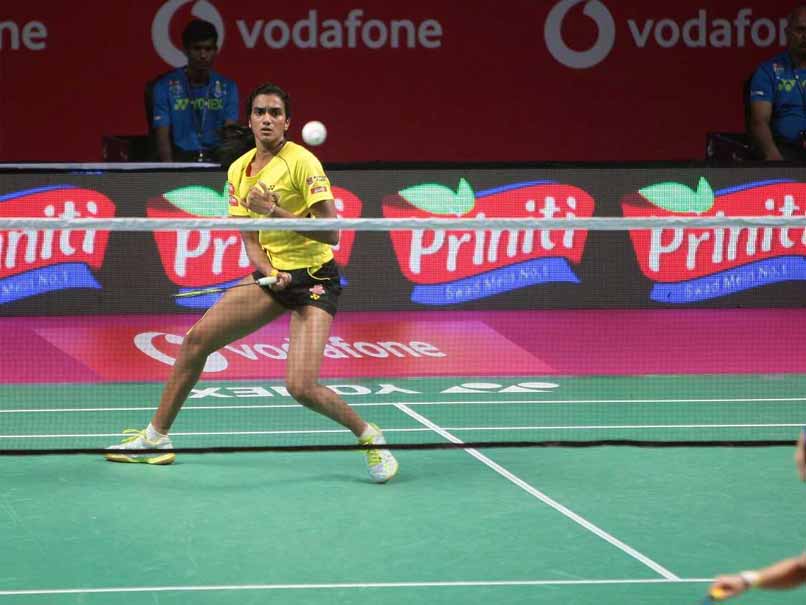 PV Sindhu got the better of World No.1 Tai TzuYing.© PBL

India's ace shuttler PV Sindhu did the star turn, winning two matches as Chennai Smashers emerged victorious in the 'Smashers derby', beating Ahmedabad Smash Masters 2-1 in the Premier Badminton League (PBL)on Saturday. After having stunned the World No.1 Tai Tzu Ying in three games in the second match of the tie, Sindhu joined forces with B Sumeeth Reddy to pull off a 15-14, 15-13 win against Kamilla Rytter Juhl and Lee Reginald to send the home fans into raptures. Sindhu, who played the mixed doubles tie as doubles specialist Gabrielle Adcock was unavailable owing to injury, combined well with Reddy to help Chennai Smashers win and keep their hopes of qualifying for the knockouts alive.

The Thai southpaw snapped Prannoy's 10-match winning streak in PBL to bring the Chennai team back in contention by winning the trump match.

Sourabh Varma gave the visiting team a vital 2-0 lead after three ties by coming back from a game down to beat Frenchman Brice Leverdez in the Chennai Smashers' trump match.

He overcame a slow start and a resilient opponent to win 11-15, 15-14, 15-12. Varma hit some brilliant smashes as he capitalised on errors at crucial junctures by his rival.

In the much-anticipated clash between Sindhu and the world number one Tai Tzu Ying, it was the Indian world number three, who emerged triumphant.

Sindhu, captain of Chennai Smashers, entered the arena to a huge cheer and didn't disappoint her fans, with a superb performance.

A 41-shot rally in the deciding game won with a deft crosscourt drop by Ying was one of the high points in the second match of the tie.

The Taiwanese shuttler who came at the back of a stunning win over Saina Nehwal started from where she left and she was literally unplayable and deceived the Indian with her clever drops.

She raced to an 8-5 lead and it looked like she would close the game without much of a competition from Sindhu. However, after the break Sindhu, playing with a heavily strapped right thigh, shifted gears to eventually seize the momentum and go up in the match.

In the second game, Sindhu cashed in on Tai Tzu's initial mistakes and blitz to an early lead. But Tai Tzu came back strong to lead 8-6 at the break.

After the breather, even though Sindhu started the proceeding winning two consecutive points, it was the World No.1 player who maintained her composure to finish the game to take the match into the decider.

In the third game, Sindhu took the charge early and aided by her opponent's unforced errors went into the breather 8-6.

After the change of ends, Tai Tzu known for her ability to bounce back from the dead did that to keep herself in the contest and gave Sindhu no place to breathe. But Sindhu remained cool and with scores tied 12-12; she won three straight points to the delight of the spectators.

"It was a great win and I feel I did extremely well to beat Tai Tzu. She played very well and I am really happy to have won the match. The crowd was extremely motivating and their support helped me a lot in getting this win," Sindhu said after the match.

Earlier, Ahmedabad went ahead by winning the first match of the evening - the men's doubles. The duo of Kidambi Nandagopal and Lee Reginald made short work of the home team's pairing of Chris Adcock and Lee Yang 15-13, 15-12. While Ahmedabad remained third in the standings with 13 points, Chennai are in seventh place with nine points. Saina Nehwal's Awadhe Warriors take on Hyderabad Hunters in tomorrow's encounter.