Bengaluru Blasters set up a potentially explosive championship match with Hyderabad Hunters after notching up a hard-fought victory over Ahmedabad Smash Masters in the second semifinal of the third Premier Badminton League on Saturday. 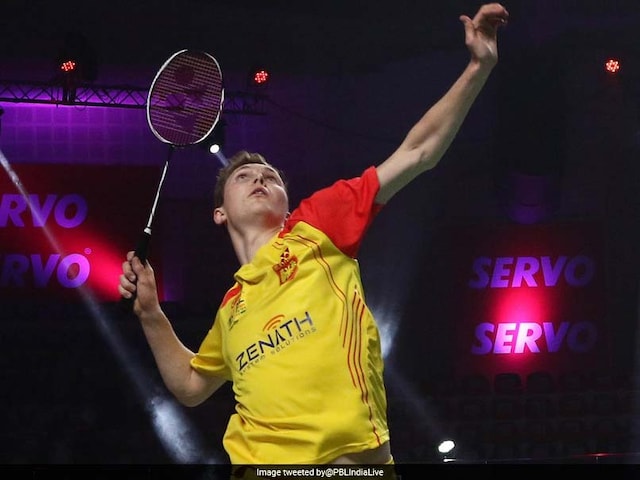 Viktor Axelsen got the better of HS Prannoy in the second Men's Singles match.© Twitter

Bengaluru Blasters set up a potentially explosive championship match with Hyderabad Hunters after notching up a hard-fought victory over Ahmedabad Smash Masters in the second semifinal of the third Premier Badminton League on Saturday. The Blasters' star player Viktor Axelsen and their Mixed Doubles' pair of Kim Sa Rang and Sikki Reddy won the last two matches of the contest to beat a valiant Ahmedabad Smash Masters 3-2 (4-3 on points). The final will take place at the Gachibowli Indoor Stadium on Sunday.

Earlier, Taiwan's Tai Tzu Ying came back from an error-prone defeat in the first game, to win her crucial Trump match and keep the Smash Masters alive in the tie.

The World No. 1 beat a fighting Kristy Gilmour (Scotland) 2-1 in the Women's Singles, the third match of the contest, to give her side a 3-2 advantage on points.

Tai Tzu took the early lead 4-2 but soon started making too many mistakes, allowing Gilmour to catch up 6-6. She almost looked helpless as Gilmour kept picking up easy points to lose the opening game at 9.

She fell behind in the second game too, giving Gilmour a whiff of victory. But then she was suddenly on song, smashing with accuracy to level the scores at 12-12 and win it at 13. Tai Tzu dominated the third game, racing away to a 8-5 lead. She wrapped up the remaining points too quickly to win at 8.

The Blasters' World No. 1 Viktor Axelsen, however, levelled the tie 3-3, getting the better of HS Prannoy in the second Men's Singles.

It proved to be an easy 15-11, 15-14 victory, even though he had to douse a rousing fight from Prannoy in the second game.

The tall Dane even had to ward off a game point after the two players matched each other all the way till 13-13. Kim Sa and Sikki beat Law Cheuk Him and Kamilla Rytter Juhl 15-12, 13-15, 15-9 to the delight of the Blasters' fans.

Earlier, India's Sourabh Verma set the ball rolling for the Smash Masters, overcoming Malaysia's Chong Wei Feng 2-1 for the first point. The World No. 17 smashed his way to an easy 15-2 win the opening game.

The second game was much tighter, with Chong Wei defending a lot more confidently. Sourabh fell behind 6-9 but caught up with a flurry of strokes at 13-13. They exchanged one more point each to make it 14-14.

But Chong Wei came up with a perfect smash to win it. Sourabh was back at his best in the decider, even though Chong Wei stayed with him till 9-9. Sourabh picked up a four-point lead to change the momentum. He eventually won 15-10.

The Blasters jumped ahead to a 2-1 lead in the Men's Doubles, with Kim Sa Rang & Mathias Boe taking the extra Trump point. The Hong Kong-Denmark duo were on top right from the start, with the No. 2 ranked Mathias Boe controlling the contest from the back of the court.

Comments
Topics mentioned in this article
Viktor Axelsen HS Prannoy Badminton
Get the latest Cricket news, check out the India cricket schedule, Cricket live score . Like us on Facebook or follow us on Twitter for more sports updates. You can also download the NDTV Cricket app for Android or iOS.