On a day she regained her world number 2 status, India ace Saina Nehwal produced a dominant performance to cruise into the quarterfinals of the Malaysia Open Super Series with a straight-game victory over Hong Kong's Pui Yin Yip here on Thursday. 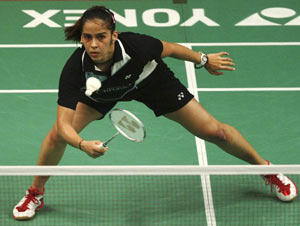 On a day she regained her world number 2 status, India ace Saina Nehwal produced a dominant performance to cruise into the quarterfinals of the Malaysia Open Super Series with a straight-game victory over Hong Kong's Pui Yin Yip here on Thursday.

The 22-year-old Saina, who was given the top billing in the tournament, didn't break much sweat as she brushed aside Pui Yin Yip 21-12 21-9 in a lop-sided women's singles match that lasted only half an hour.

The Olympic bronze medallist Indian will next take on Nozomi Okuhara of Japan in the quarterfinals at the National Sports Complex here.

Saina has never faced off with the world number 33 Japanese shuttler, who beat Indonesian Lindaweni Fanetri 21-13 21-13 in another match.

However, India's top male shuttler, Parupalli Kashyap went down fighting to sixth seed Jan O Jorgensen of Denmark 17-21 14-21 in the second round of the men's singles event.

The Olympic quarterfinalist, Kashyap, who also jumped one spot to crack the world number 10 bracket, however, could not reach the quarterfinals as he struggled with his right leg against Danish Jan Jorgensen, following a muscle pull suffered yesterday in the first round.

Saina, who had reached her career best world no. 2 in December 2010 for the first time, was lagging behind initially but she rode on her 12 smash winners to tame Pui Yin Yip, who played well at the nets.

In the first game, she was lagging 2-6 behind but the Indian caught up with her rival at 9-9 and then didn't give any chance to the Hong Kong girl to recover.

In the second game, Saina was more ruthless as she reeled off six straight points to create a huge gulf, which Pui Yin Yip could never bridge.

Kashyap started well in the first set and was up to the Danish challenge. Both were tied at 11 each. But smart play from the 25-year-old Danish helped him bag the first set 21-17.

The two shared an even record in the two prior encounters with Kashyap having the last laugh during their latest meeting at the Hong Kong Open last year.

In the second set, Jorgensen and Kashyap battled hard till 8-8. But after that Jorgensen didn't give much opportunity to the Indian. The Danish rode on his 10 smash winners to emerge victories.

"I pulled up my quadriceps muscle in the right leg. It happened yesterday in the first round. But I still played today and lost to Jan Jorgensen. I couldn't play my best because of the injury," Kashyap said.

"I will have a scan and see what the actual problem is. Hope I can recover quickly and get back to regular training and be fit for the All England," he added.