Satwiksairaj Rankireddy and Chirag Shetty crashed out in the first round as Indian shuttlers got off to a poor start at Malaysia Masters on Tuesday. 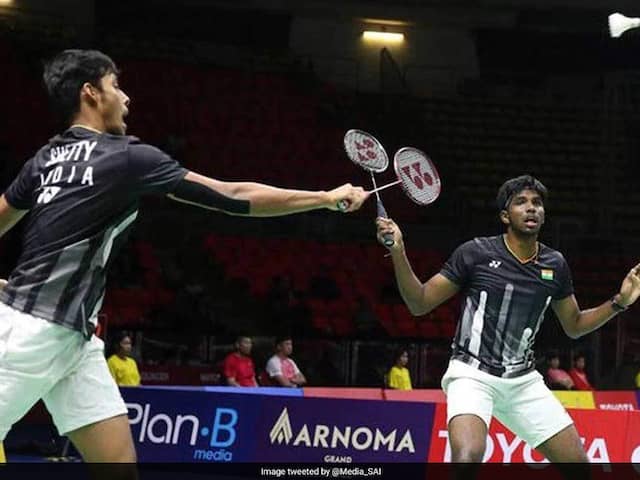 Satwiksairaj Rankireddy and Chirag Shetty were knocked out in the first round of Malaysia Masters.© Twitter

Lakshya Sen failed to qualify for the main draw while the pair of Satwiksairaj Rankireddy and Chirag Shetty crashed out in the first round as Indian shuttlers got off to a poor start at Malaysia Masters on Tuesday. Rising player Lakshya went down to Denmark's Hans-Kristian Solberg Vittinghus 21-11 18-21 14-21 in a hard-fought match in the men's singles qualifiers that lasted 49 minutes. Lakshya's compatriot Shubhankar Dey also failed to make the men's singles main draw after losing 15-21 15-21 to Malaysia's Liew Daren in the qualifiers of the Super 500 tournament.

The biggest upset of the day for India was the ouster of the world number 12 men's doubles duo of Rankireddy and and Shetty, who fought hard before going down to world number 19 Ong Yew Sin and Teo Ee Yi of Malaysia.

It was a bad day in office for the Indians as the women's doubles pair of Pooja Dandu and Sanjana Santosh also failed to make the main draw.

Dandu and Santosh lost to the Indonesian pair of Siti Fadia Silva Ramadhanti and Ribka Sugiarto 15-21 10-21.

On Wednesday, Parupalli Kashyap will open his campaign against top seed Kento Momota, while Kidambi Srikanth will take on second seed Chou Tien Chen of Chinese Taipei in the men's singles opening round.

Among other Indian men's singles shuttlers, Sameer Verma will take on Thailand's Kantaphon Wangcharoen while H S Prannoy will be up against Kanta Tsuneyama of Japan in the opening round.

The Indian women singles shuttlers will also open their campaigns on Wednesday with sixth seed PV Sindhu taking on Russia's Evgeniya Kosetskaya, while Sania Nehwal will be up against Lianne Tan of Belgium.

In the mixed doubles, the Indian pair of Pranaav Jerry Chopra and N Sikki Reddy are up for a tough first round encounter as they are pitted against top seeds Zheng Si Wei and Huang Ya Qiong of China.