India's badminton stars Saina Nehwal and PV Sindhu will be the cynosure of all eyes when they kick off their campaign at the USD 350,000 India Open, starting Tuesday. 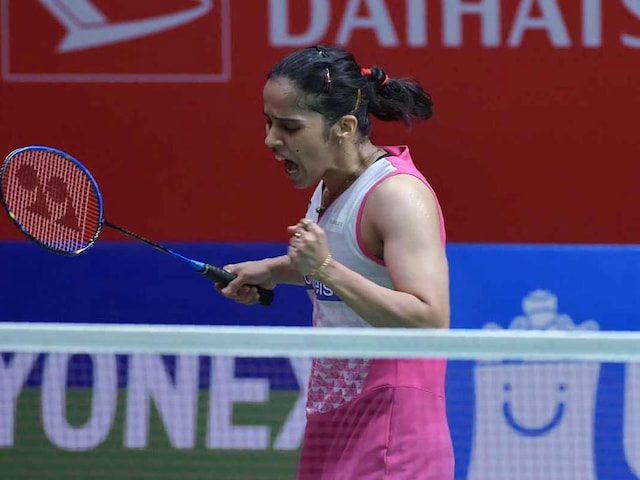 Saina Nehwal will face Denmark's Sofie Dahl in the opening round.© AFP

India's badminton stars Saina Nehwal and PV Sindhu will be the cynosure of all eyes when they kick off their campaign at the USD 350,000 India Open, starting Tuesday. The event will also feature 2014 champion Kidambi Srikanth. Saina, who had lifted the India Open Super Series title in 2015, has made a superb start to the new season as she reached the finals of Indonesia Masters after recovering from an ankle injury and she would be one of the favourites this week. This was the first major final appearance for Saina since her injury-induced ouster from the Rio Olympics. In 2017, the Indian found it difficult to consistently cross the second round, mainly due to her poor fitness level.

However, now that she has displayed her new-found fitness at the Indonesia Masters, she will hope to keep that intensity going when she plays at the second successive tournament at Siri Fort Sports Complex here.

Placed in the bottom half, fourth seed Nehwal will face Denmark's Sofie Dahl in the opening round and fifth seed Beiwen Zhang will be her likely opponent in the quarterfinals.

Sindhu, on the other hand, has been simply sensational ever since her Olympic silver medal as she clinched three titles and three silvers last season and rightly received top billing for the tournament here.

The World Championship silver medallist will begin her campaign against Denmark's Natalia Rohde and barring any surprises her real challenge will come in the form of former world champion Ratchanok Intanon in the semi-finals.

Interestingly, Sindhu's campaign at Jakarta was cut short by compatriot Saina in the quarterfinals and there is a realistic possibility that the celebrated duo can again meet in an all-Indian final if they can live upto their reputation.

In men's singles, Srikanth exceeded all expectations with four titles and a runners-up finish last season but a leg injury during the Senior National Badminton Championships in Nagpur affected his game as he had to sit out of the China Open and Hong Open last year.

When he returned at the Dubai Super Series Final, lack of match practice affected his performance as he lost all his three matches in the group stage.

The World No 3 Indian also had to delay his start to the new season after a minor injury saw him pull out of the Indonesia Masters at the last moment.

Srikanth stood at the podium here in 2014 alongside Saina but his last campaign at the India Open ended in disaster as he failed to cross the opening hurdle after being outclassed in straight games by his rival world No 1 Viktor Axelsen. However, the Indian is not new to such situations as he has proved last year when he recovered from this loss and injury concerns to make 2017 the most memorable year of his relatively short career.

The second seeded Indian will open his campaign against Hong Kong's Lee Cheuk Yiu and if he can live upto the expectations, there is every chance that he might face off top seed and defending champion Axelsen in the final, if the Dane too can continue his red-hot form.

World number 10 HS Prannoy too have been a revelation last season as he reached the semifinals at Indonesia and French Open and clinched the US Open Grand Prix Gold and the Senior Nationals.

The Indian had a decent outing at the PBL and he will look to start the new season on a positive note when he face a qualifier in his opening match.

Among the other Indians, Singapore Open champion B Sai Praneeth will face Rajiv Ouseph of England in the opening round while Commonwealth Games' gold medallist Parupalli Kashyap will begin his campaign against Hans-Kristian Vittinghus of Denmark and Ajay Jayaram will be pitted against Indonesia's Tommy Sugiarto.