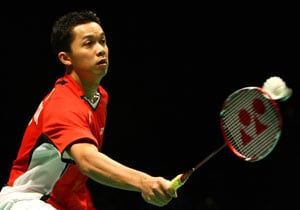 Hidayat whom many regard as the finest player never to have won the world's oldest tournament may have lost his last chance to do as he slipped to a 21-10, 21-14 defeat.

It was a strangely one-sided affair, especially as Hidayat never stopped trying to work his way back into the match, and there were only the briefest of moments, early in the second game, when he looked as though he might turn it around.

"I don't know why I was so bad -- I just wasn't feeling well," the second seed said. "I don't think he was really good. I just made so many unforced errors."

Despite this, there were plenty of long rallies, and an important ingredient in the upset was Yamada's speed at knocking off the shuttle in the forecourt, one of Hidayat's most renowned areas of strength.

The world number 28 first signalled that he was bothering his star opponent when he launched a jump smash at 12-8 which put Hidayat's flick serve dramatically on the floor.

The rally at 16-7, in which Hidayat attacked, failed to force the shuttle through, then had to retrieve, and ended by trying to keep the shuttle tight but putting it into the net, indicated the scale of his growing problems.

Several times early in the second game he missed again with net shots, swivelling round in disappointment as he did so, though he may have underestimated the part his opponent's threatening speed played in these errors.

Yamada's four-point run from 12-7 to 16-7 did much to put the outcome of the match beyond doubt, and all that Hidayat could rescue was a bout of appreciative whistles as he managed a behind-the-back block three points before the end.

Yamada now plays Wang Zhengming, a rising Chinese player pushing towards the top 20, though two other Chinese may benefit more from the upset.

One is Chen Jin, the world champion, who overcame Rajiv Ouseph, the English champion 23-21, 21-12, who is in the same quarter.

The other is Lin Dan, who began his attempt to become the first men's singles player of the open era to win five All-England Open titles by producing moments of breathtaking brilliance.

However, China's Olympic champion was scathing in his appraisal of the latest incarnation of the world's oldest tournament after a 21-14, 21-17 win over Wong Choon Hann, the former Commonwealth champion from Malaysia.

"The lighting is bad and there is no scoreboard this time," Lin claimed, according to a Chinese interpreter.

"I think maybe the All-England should do better because this is a Premier event right now."

Lin's comments were not exactly accurate. There were miniature scoreboards behind each court but turned towards the spectators, and a master scoreboard at the end of the arena - though some found it unclear to read.

"It's disappointing that someone who won four All-England titles and has been a consistent supporter of the All-England now believes the event doesn't matter so much to him," said Adrian Christy, the chief executive of Badminton England, the host organisation.

"When you look at the world class field and the players who are here I think it is a testimony to the status that the All-England has.

"The best players in the world want to come to Birmingham to compete, the audience figures continue to grow, and the global TV coverage is greater than it has ever been.

"In the badminton world, outside of the Olympic Games and the world championships this is seen by many people as the tournament to be a part of and to win."