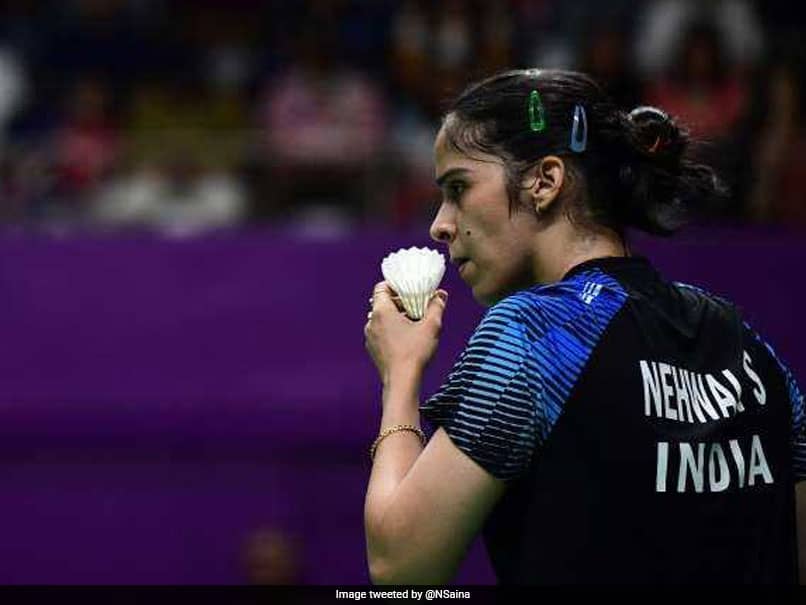 Saina Nehwal defeated Gregoria Mariska 21-11, 21-12 in the women's singles semi-final in a match that lasted for 30 minutes to enter the finals. Saina won the first game in 13 minutes while she took 17 minutes to close the second game. She will face top-seeded Tai Tzu Ying in the summit clash on Sunday. Earlier, defending champion Kidambi Srikanth was knocked out of the Denmark Open 2018 after losing 16-21, 12-21 in 44 minutes to world no 1 Kento Momota in 44 minutes. The first game started on an even note before Japan's Kento Momota took a slender 11-10 lead at mid-break and then went on to win the game 21-16. However, the second game saw Kidambi fight back but Momota took five consecutive points to lead the Indian 8-3. Momota had a comfortable four-point lead at mid-break of the second game. After the break, Momota upped the ante and breezed past the Indian without much problem. By the virtue of this win, Momota leads the head-to-head battle 9-3.

18:40 IST: Thank you for joining us for the live blog. Do tune back tomorrow for the women's singles final clash between Saina Nehwal and tai Tzu Ying.

18:35 IST: Consecutive points for Saina Nehwal, she has extended her lead to 17-11 in the second game.

18:32 IST: Long rally! Saina Nehwal makes an unforced error to net it and Nehwal makes it a 14-9 lead in the second game.

18:28 IST: Gregoria comes from behind to make it 7-7 in the second game. But Saina Nehwal plays an accurate smash way wide off the reach of the Indonesian to make it 9-7.

18:25 IST: Unforced error from Gregoria, she nets it. Saina Nehwal has taken a 7-3 upper hand in the second game.

18:24 IST: Gregoria pulls one point back, she plays the shot wide. Saina makes a full stretch to reach the shuttle, but fails, she leads by a slender 4-3 margin.

18:22 IST: Brilliant smash from Saina Nehwal, she takes back-to-back points in the second game to make it 3-0.

18:17 IST: Challenge from Saina Nehwal. Successful, two quick challenges from the India, both correctly taken. Saina has taken the game point at 20-8.

18:14 IST: Long shot from Gregoria, plenty of unforced error from the Indonesian will allow Saina to capitalise. She leads 15-6.

18:10 IST: Gregoria plays the shot wide, way over the line. Saina Nehwal stretches her lead from the unforced error 9-3.

18:06 IST: Dominating start from Saina Nehwal, she has take a 4-1 lead before Gregoria pulls one back to make it 4-2.

18:03 IST: Saina Nehwal and Gregoria Mariska will face each other for the first time in an encounter. Nehwal ranks 10th in World while Gregoria is World no.19, we are minutes away from the start of the all-important clash.

18:00 IST: Top seeded Tai Tzu Ying has entered the women' singles final. She will face the winner of the match between Saina Nehwal and Gregoria Mariska in the summit clash.

17:44 IST: In the women's singles semi-final, top seeded Tai Tzu Ying has won the first game 21-14 against seventh seed He Bingjiao. The match will be followed by India's Saina Nehwal facing Gregoria Mariska Tunjung in the other semi-final.

17:15 IST: Challenge taken by Kento Momota, he thinks the shot landed inside the line. But it is otherwise, service error from him. Srikanth now trails 11-17.

17:10 IST: Error from Kidambi Srikanth finds the net! Kento Momota has taken a 14-9 lead in the second game.

17:08 IST: Brilliant smash from Kidambi Srikanth, well wide from Kento Momota, who could not make his ground. Srikanth trails 9-12 in the second game.

17:06 IST: Mid-game advantage for Kento Momota, he leads 11-7 in the second game in 11 minutes. It's going bad to worse for Kidambi Srikant.

17:03 IST: Long Rally! Just falls inside the line, Kento Momota takes five straight points to extend his lead to 8-4 against Kidambi Srikanth in the second game.

17:02 IST: Kento Momota plays it wide, he got to it quickly. Srikanth was just not ready. Momota takes a slender 6-4 lead in the second game.

16:59 IST: Brilliant reflexes from Momota, just makes a soft touch to play the shot over the net and take a point. It's all square at 3-3.

16:53 IST: Kento Momota plays it wide, way out of reach for Kidambi Srikanth. Brilliant execution to take a 19-13 lead.

16:51 IST: Brilliant smash from Kento Momota, stayed low, Kidambi Srikanth failed to pick it up and gives away a point to Momota.

16:50 IST: First cross-court shot from Kento Momota, ends up way away from the line. Srikanth trails 13-15 in the first game.

16:48 IST: Kento Momota has stretched his lead! 13-10 after the mid-game interval. Just too many unforced errors from the seventh seeded Indian.

16:45 IST: Kento Momota has the advantage at mid-game interval! Leads 11-10 by a slender margin to Kidambi Srikanth. It has been a brilliant exhibition of shots on display from both the players, no one looking to give away easy points.

16:42 IST: Superior seeded Kenoto Momota nets it! Kidambi Srikanth takes a 9-6 lead in the first game. He looks so much better when he is relaxed, Srikanth.

16:40 IST: Long rally! A mix of soft touches and long shot from Kidambi Srikant. Both the players looked to play the net shots but Srikanth takes two consecutive points to lead 7-5.

16:36 IST: Back-to-back points for Kidambi! He comes from behind to take a slender 2-1 lead in the opening game before Momota two back to lead 3-2. It's looking neck-in-neck.

16:35 IST: We are underway! Kidambi Srikanth makes the opening serve, Kento Momota takes the initial point. The smash from Kidambi ends up taking the net.

16:00 IST: Hello and welcome to the live commentary from the semi-final clash of the Denmark Open 2018 between Kidambi Srikanth and Kento Momota.

Saina's victory against Okuhara comes at the back of a superlative performance that saw her conquer world number two Akane Yamaguchi of Japan for the first time in four years. The Indian shuttler, who is unseeded in the tournament won her match rather convincingly against Yamaguchi, and she seemed to carry forward into the last eight match against Okuhara. Saina was outgunned by Okuhara in the first game, trailing from start to finish. But she came out fighting in the second. The Japanese shuttler seemed to be coasting in the second game as well, having taken a 7-3 lead. Saina closed the gap by winning three points in a row but again fell a fairway behind as Okuhara opened a 10-6 lead.

But that was the last of Okuhara's dominance. Saina won four consecutive points to draw level at 10-10 and then soon opened a 15-12 lead. The Indian never looked back from there and went on to win the game 21-16 to take the quarterfinal into a decider. The final game was a procession for Saina as she completely decimated her higher-ranked opponent. A six-point burst helped Saina take a commanding 12-3 lead and Okuhara never recovered after that.

Comments
Topics mentioned in this article
Kidambi Srikanth Saina Nehwal Live Blogs Badminton
Get the latest updates on IPL 2021, IPL Points Table , IPL Schedule 2021 , live score . Like us on Facebook or follow us on Twitter for more sports updates. You can also download the NDTV Cricket app for Android or iOS.