Sindhu, who had defeated Olympic Champion Li Xuerui of China earlier in the year, said she never felt any psychological pressure while playing against Chinese opponents. 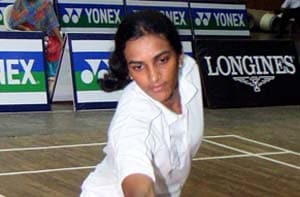 Touted as India's next badminton sensation after Saina Nehwal, young P V Sindhu feels the Chinese shuttlers, who have been dominating the international arena for quite some time now, are not unbeatable.

"The Chinese players are really very good. They are top players, but it is not that they are unbeatable. Whoever plays well on a given day, that player wins," Sindhu, who won the Malaysia Grand Prix Gold this year, told PTI upon her return to the city.

Sindhu, who had defeated Olympic Champion Li Xuerui of China earlier in the year, said she never felt any psychological pressure while playing against Chinese opponents.

"I played with two Chinese players earlier. I was successful once and lost the other match. But, there was no pressure. I just played my game. My coach really supported and encouraged me," she said.

The victory in the Malaysia Grand Prix Gold, her maiden Grand Prix title, was the outcome of her hard work since her childhood, Sindhu said.

Chief National Coach Pullela Gopichand, who is her mentor, and her parents have been a constant source of support and encouragement, she said.

The 17-year-old shuttler, who is currently ranked 13 in the BWF rankings, hopes to break into the top 10 by the end of this year.

"My long-term goal is to become the world number one players," Sindhu said.

Sindhu hoped to do well in the Sudirman Cup, to be held in another two weeks time.

Her height (5ft 10 inches) has been an asset to her and understandably, Sindhu says she likes to play attacking daminton.

Sindhu attributed her success to Gopichand, who she says is her role model.

Comments
Topics mentioned in this article
PV Sindhu Saina Nehwal Jwala Gutta Malaysian Grand Prix Badminton
Get the latest updates on ICC T20 Worldcup 2022 and CWG 2022 check out the Schedule, Live Score and Medals Tally. Like us on Facebook or follow us on Twitter for more sports updates. You can also download the NDTV Cricket app for Android or iOS.