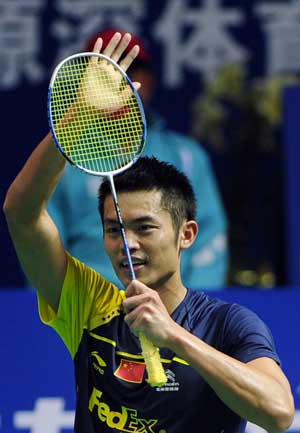 Lin had breezed past his long-time foe and Danish veteran Peter Gade to set up the final with Chen, who created the shock of the series after beating defending champion and world number one Lee Chong Wei in the semis.

Danish duo Mathias Boe and Carsten Mogensen denied China a clean sweep of the men's events after the defending champions trounced their Chinese opponents Chai Biao and Guo Zhendong in the doubles final, 25-23, 21-7.

It was an all-China affair in the mixed doubles final, with Zhang Nan and Zhao Yunlei claiming an easy victory over Xu Chen and Ma Jin, 21-13, 21-15.