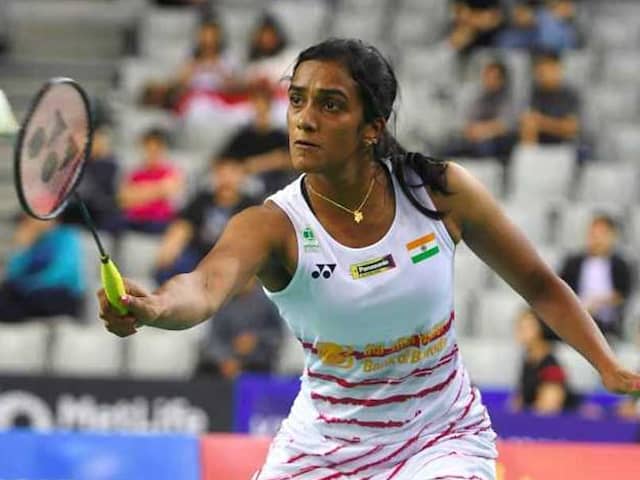 Women's singles star PV Sindhu was the lone Indian to enter the semi-finals of the BWF Badminton World Championships, with Saina Nehwal, B Sai Praneeth and the mixed doubles pair of Satwiksairaj Rankireddy and Ashwini Ponnappa losing in the quarter-finals on Friday. Third seed Sindhu beat Nozomi Okuhara 21-17, 21-19 in 58 minutes. In both games, Okuhara was strong at the beginning but Sindhu, soon, got in the flow and caught up with the Japanese. In the semi-final, three-time World Championships medallist Sindhu will take on another Japanese, second seed Akane Yamaguchi, who beat Chinese fifth seed Chen Yufei 21-13, 17-21, 21-16 victory in an hour and eight minutes. In the men's singles category, India's Sai Praneeth fought hard but went down to Japan's Kento Momota in 39 minutes. Sai Praneeth lost the game 21-12, 21-12.

21:20 IST: And it is game! Sindhu lets out a huge roar as Okuhara's return lands out of the court.

21:18 IST: Match point for Sindhu! Can she avenge her 2017 World Championships loss?

21:17 IST: The second game is going down to the wire. Neither Okuhara nor Sindhu is giving in. Meanwhile, a brilliant cross-court drop shot helps Okuhara draw level at 19-19.

21:14 IST: A beautiful drop shot from Okuhara gives her a 18-17 lead against her Indian counterpart.

21:01 IST: At mid-break in the second game, Sindhu trails Okuhara 8-11. Can she pull the game back like in the first game?

20:57 IST: Sindhu is not letting Okuhara settle in the second game. She takes another point to trail Okuhara 7-10 in the first game.

20:46 IST: Game! A cross-court smash seals the first game for Sindhu as she wins 21-17 against Nozomi Okuhara.

20:41 IST: Sindhu is nailing her backhand cross-court shot today. This is the second time she places the shuttle on the top left corner in Okuhara's side of the court.

20:36 IST: Sindhu is not going to let her lead vanish. A ferocious smash down the line gives her a slender two-point lead against Okuhara. Sindhu leads Okuhara 14-12.

20:31 IST: After a slow start, Sindhu takes a couple of consecutive points to lead Nozomi Okuhara 11-10 at mid-break.

20:29 IST: PV Sindhu draws level at 8-8 against Nozomi Okuhara. It seems the Indian is getting in the flow.

20:27 IST: A brilliant back-hand return from Sindhu to the left corner of Okuhara's court gets her an important point. Sindhu 6-8 Okuhara.

20:21 IST: Okuhara gains a three-point lead as Sindhu's return lands outside the court.

20:20 IST: Sindhu draws level at 1-1 after Okuhara gets the first point of the game with a powerful smash down the line.

20:17 IST: PV Sindhu is up against Japan's Nozomi Okuhara in the women's singles quarter-finals.

20:12 IST: Praneeth is knocked out of the World Championships after a 12-21, 12-21 loss to Japans Kento Momota in men's singles quarter-finals.

20:07 IST: Praneeth's jump and smashes lands outside the court as Momota leads him 14-8 in the second game.

19:55 IST: What a shot! Praneeth's behind-the-back backhand wins the rally for him as he takes the first two points of the second game.

19:48 IST: Momota is cruising in the first game, Praneeth, on the other hand, is giving away his points. Momota 19-6 Praneeth.

19:40 IST: While Momota is moving fluently across the move, Praneeth seems a bit caught up. Momota is picking up easy point with his on-point smashes. Momota 9-4 Praneeth.

19:36 IST: Sai Praneeth draws level at 1-1 as Momota makes an unforced error. The Japanese's backhand return lands outside the court.

19:34 IST: Momota starts the proceedings and takes the first point with a cross-court shot.

19:31 IST: Both Praneeth and Momota are walking out to the court for the quarters clash.

19:26 IST: For India, in men's singles quarter-finals round, Sai Praneeth will be up against Japan's Kento Momota.

19:25 IST: Hello and welcome to the live blog of the BWF Badminton World Championships quarter-finals round.

Earlier in the day, it was the end of the road for World No. 10 Saina Nehwal as she lost to Olympic champion Carolina Marin 6-21, 11-21 in a match that lasted 31 minutes. In the opening game, Marin accumulated quick points to quickly race to the mid-game interval with a massive 11-2 lead. Saina, on the other hand, looked out of touch and failed to get better of her counter-part. The Indian also made repeated unforced errors, which helped Marin close the game at 21-6 in 12 minutes without breaking a sweat.