Saina brought home India's first Olympic medal in badminton when she clinched the bronze in London last year and this year, Saina has already set her eyes on the All England and World Championship titles. 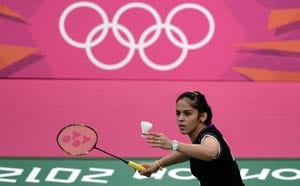 After a highly successful 2012, Saina Nehwal will look to start the new year on a winning note when she takes the court at the season-opening Korea Super Series Premier badminton tournament at Seoul on Wednesday.

The 22-year-old brought home India's first Olympic medal in badminton when she clinched the bronze in London last year and this year, Saina has already set her eyes on the All England and World Championship titles.

However, the world number three Indian will look to get into the groove early during the Korea Open. The draw is also in her favour as she will start her campaign against Sapsiree Taerattanachai of Thailand tomorrow at the SK Handball Stadium.

Saina is likely to sail to the quarterfinals where she is expected to meet sixth seed Ratchanok Intanon. If she can get across the young sensation from Thailand, Saina is likely to meet Olympic champion and world number one Li Xuerui in the semifinals.

Among others, world number 14 Parupalli Kashyap will take on England's Rajiv Ouseph in the men's singles first round.

Rajiv had beaten Kashyap in the semifinals of the 2010 Commonwealth Games but the Indian avenged his loss during their last meeting at China Masters in 2011. Kashyap is in good form, specially after ending the year with his first international title -- the Syed Modi Grand Prix Gold.

His first round rival Rajiv, on the other hand, is struggling for form as he suffered five first-round defeats from the six tournaments following London 2012 which ousted him from the world's top 30 bracket.

Another player rising up the ranks in Indian badminton is P V Sindhu and she will clash with Lindaweni Fanetri in her opening round. She is likely to take on Olympic champion and top seed Li Xuerui in the second round on Thursday.

For the records, the 17-year-old from Hyderabad had defeated Li just after her Olympic feat, during China Masters in September last year.

The tournament in Seoul is the first of five Premier events in the 2013 World Super Series circuit.