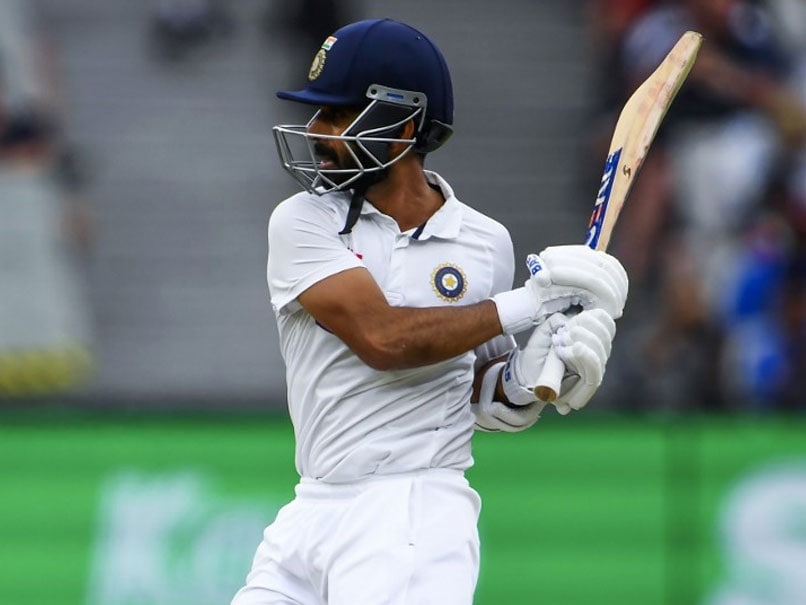 Ajinkya Rahane brought up his 12th Test century in the second Test against Australia.© AFP

Former England captain Michael Vaughan on Sunday lauded the "incredible performance" of India skipper Ajinkya Rahane against Australia on the second day of the ongoing Boxing Day Test at the Melbourne Cricket Ground. Rahane smashed his 12th century in Test cricket and is currently unbeaten at 104 runs. "His 100 at lords was special but this one in Melbourne as skipper with his team 1-0 down and up against it tops the lot ... what an incredible performance so far by @ajinkyarahane88!!! #AUSvIND," Vaughan wrote on Twitter.

At stumps on day two, the visitors' score read 277/5 and the side has taken a lead of 82 runs over Australia. The hosts might have scalped wickets of India's top-order, but in the final session, Rahane and Jadeja showed grit and determination to give India firm control of the match. Rahane and Jadeja have put on an unbeaten stand of 104 runs for the sixth wicket.

Former India all-rounder Suresh Raina also hailed Rahane and Jadeja for their contribution. "Well done @ajinkyarahane88 and @imjadeja! You've shown what INDIA is all about. Am sure we will fight and win Melbourne Test. Come on India #IndvsAus," his tweet read.

Rahane and Jadeja are currently unbeaten on 104 and 40 respectively for India in the first innings and they will resume the proceedings for the visitors on day three of the second Test.

This is Rahane's eighth Test ton overseas and this is his first hundred as captain of Team India. With this knock, Rahane also became the second Indian batsman to score a century on his first match as captain in Australia.

Virat Kohli was the first one to achieve the feat in 2014 when he registered a century in Adelaide. Kohli had gone back home after the first Test against Australia after being granted paternity leave by the BCCI.

On day one of the second Test, India had bundled out Australia for 195 as Jasprit Bumrah scalped four wickets while Ravichandran Ashwin took three wickets.

Ajinkya Rahane Michael Vaughan Cricket
Get the latest updates on IPL Auction 2023 and check out  IPL 2023 and Live Cricket Score. Like us on Facebook or follow us on Twitter for more sports updates. You can also download the NDTV Cricket app for Android or iOS.