As India registered an emphatic series win to retain the Border-Gavaskar Trophy in Australia, skipper Ajinkya Rahane decided to give a pep talk to all the players at The Gabba. 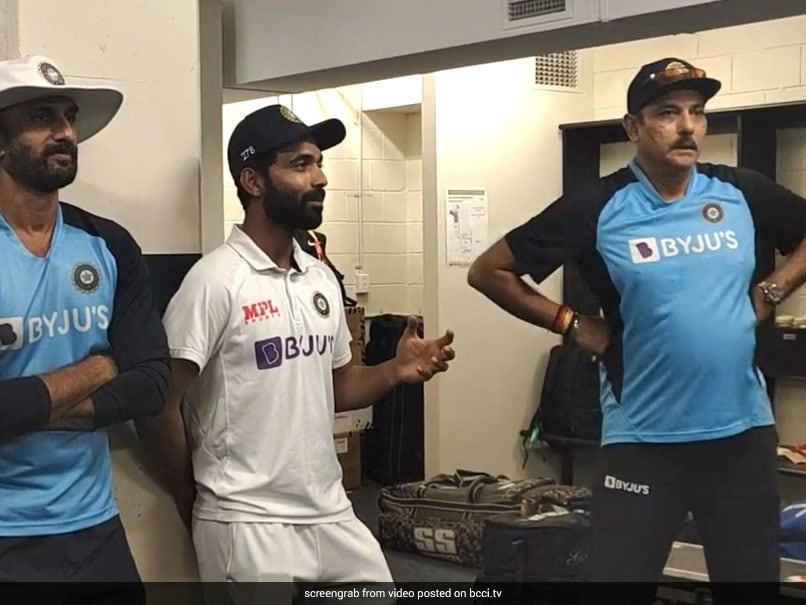 Ajinkya Rahane gave a pep-talk to the Indian team after historic win in Brisbane.© BCCI.tv

Ajinkya Rahane, India's stand-in skipper in the just-concluded Test series in Australia, addressed the team after the visitors secured a memorable win at the Gabba. India, marred with injuries, beat Australia by three wickets in the fourth Test and in the process ended the hosts' 32-year-long unbeaten run at the Gabba. The Board of Control for Cricket in India (BCCI) on Saturday took to Twitter to share a video in which Rahane can be seen appreciating the effort of each individual throughout the Test series that saw them turn things around after being bowled out for 36 in the first Test in Adelaide.

"This is a massive moment for all of us. What happened in Adelaide, how we came back from Melbourne onwards was really good to see. Everyone did their effort, everyone contributed, it was not about one or two individuals," Rahane said.

Rahane also urged Kuldeep Yadav, who did not get to play any Test in the series, to keep working hard and said that his time will come.

"I just want to mention Kuldeep Yadav and Kartik Tyagi. Kuldeep, I know it was tough for you, you did not play a game here but your attitude was really good. Your time will come, just keep working hard. Kartik you were fantastic,"  he added.

As we draw curtains on our historic triumph and start our preparations for the home series, here's Captain @ajinkyarahane88's address to #TeamIndia from the Gabba dressing room.

After India's win at the Gabba, the BCCI had shared a video from the dressing room where head coach Ravi Shastri was seen giving a rousing speech to the squad.

With the win in Brisbane, India climbed to the top of the World Test Championship standings.

Kuldeep Yadav Cricket Australia vs India 2020-21
Get the latest updates on IPL Auction 2023 and check out  IPL 2023 and Live Cricket Score. Like us on Facebook or follow us on Twitter for more sports updates. You can also download the NDTV Cricket app for Android or iOS.