Liu Hong, who won the women's 20 kilometres walk on Friday to hand China its first gold medal of the Beijing world championships, said she was always confident of success despite the immense pressure. 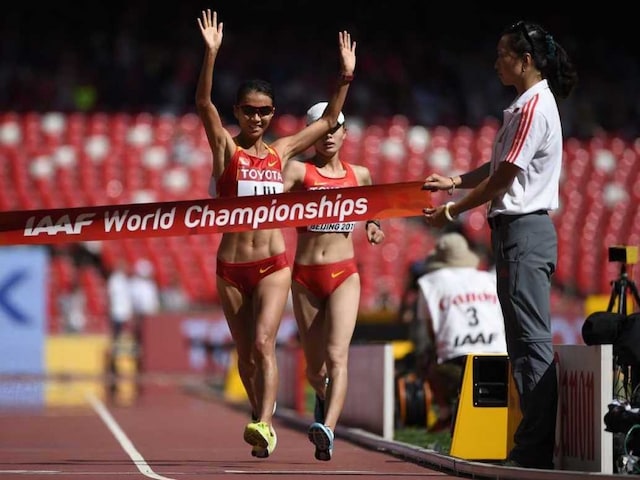 The morning after Usain Bolt's emphatic 200m win at the Bird's Nest stadium, Liu gave home fans something to cheer when she headed a Chinese one-two in the walk with "little sister" Lu Xiuzhi.

The pair broke early and built up a massive lead in Beijing's scorching morning heat, with Liu coming home for gold in one hour 27.45 minutes with Lu right behind her. Ukraine's Lyudmyla Olyanovska took bronze, 28 seconds behind.

"There was a lot of pressure but I was confident in this mission," said Liu, who added that she had struck a pact with Lu, her junior by seven years, not to race each other in the final kilometres.

"When we hit the front at the start I didn't think we were going that quick but nobody followed us, so we just carried on. It's a dream to win the gold."

After the US medal tally was boosted on Thursday by golds from triple jumper Christian Taylor and 400m runner Allyson Felix, it was another of their star athletes who took to the Bird's Nest on Friday in the shape of multi-discipline specialist Eaton.

The world record-holder and defending champion, also reigning Olympic and two-time world indoor champion, timed 10.23sec in the opening 100m before leaping a best of 7.88m in the long jump, both leading performances.

Eaton, whose Canadian wife Brianne Theisen Eaton claimed silver behind Jessica Ennis-Hill in the women's heptathlon, then managed a best of 14.53m in the shot put to leave him on 2,830 points. Canadian Damian Warner sat in second with 2,747 with Germany's Rico Freimuth third (2,730).

The evening session sees the decathletes compete in the high jump and 400m, with the 110m hurdles, discus, pole vault, javelin and 800m all scheduled for Saturday.

Elsewhere in the field, Ukraine's Andriy Protsenko and Russian Olympic champion Ivan Ukhov both missed out on advancing to the final of the high jump, to be held on the ninth and last day of competition on Sunday.

Protsenko managed 2.29m and Ukhov only 2.26 as 14 jumpers qualified. Among those successful in hot conditions was Qatar's Mutaz Essa Barshim, the Doha-born 24-year-old who won bronze at the London Olympics before going on to claim silver at the Moscow worlds a year later and the world indoor gold in Sopot last season.

"I want to jump very high to please my coach and myself," said Barshim. "I do not want to be called the king of high jump unless I get on top of the list. Until then you can call me the prince of high jump!"

Olympic champion Aries Merritt will go for gold in the sprint hurdles just a few days before he undergoes a kidney transplant.

The American world record-holder will receive a kidney from his sister on Tuesday after being diagnosed with a rare disease in the wake of the 2013 worlds in Moscow.