Anchor leg Novlene Williams-Mills pulled out a stunning last 50m to catch Francena McCorory in Beijing as the Jamaicans clocked three minutes, 19.13 seconds -- the best time in the world this year -- to pip their rivals on the line. 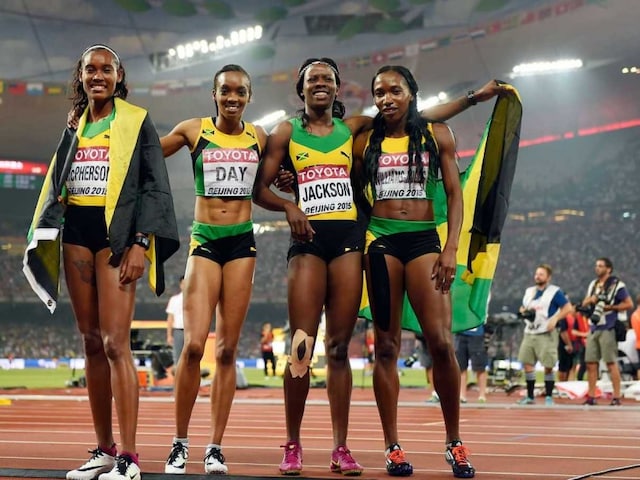 Even without Usain Bolt, Jamaica finished the world championships with a bang on Sunday, storming to the women's 4x400m relay title to match Kenya's gold tally at the top of the medals table.

Anchor leg Novlene Williams-Mills pulled out an eye-popping last 50m to catch Francena McCorory as the Jamaicans clocked this year's best time of three minutes, 19.13 seconds to pip the United States on the line in Beijing.

The Americans hit back to take the men's 4x400m, veteran LaShawn Merritt passing Carl Lewis as his country's most decorated male world championships athlete with 11 medals.

But they will leave China with a sense of foreboding before next year's Rio Olympics after playing second fiddle to the Jamaicans, who won seven gold medals -- three of them, inevitably, Bolt's.

Kenya also finished with seven golds plus six silvers and three bronzes, an overall tally which edged them ahead of Jamaica on the final standings.

But their success was tempered after two of their athletes, Joyce Zakary and Koki Manunga, failed pre-competition drugs tests. Hosts China placed 11th with one gold, seven silvers and one bronze.

"That's when you have the heart of a champion," Williams-Mills said of her lung-bursting pursuit of McCorory. "That's what you do. These girls, they had it all the way."

American star Allyson Felix looked to have dug the Olympic champions out of an early hole with a blistering third leg to give McCorory a lead into the last lap, until Williams-Mills kicked coming into the home straight to win it for Jamaica. Britain took bronze in 3:23.62.

As heads went down once more in the American camp, Merritt flexed his muscles by anchoring the United States to a sixth consecutive victory in the men's final.

Merritt, David Verburg, Tony McQuay and Bryshon Nellum finished in 2:57.82 to extend a remarkable winning streak dating back to Helsinki in 2005. Trinidad and Tobago claimed silver in 2:58.20 with Britain taking bronze in 2:58.51.

Kenya's demonstrated their middle-distance brilliance again when Asbel Kiprop completed a world title hat-trick in the men's 1,500m to add to the 800m gold won by David Rudisha earlier in the competition.

"I'm so proud of myself to become a member of this exclusive club of three-times world champions," said Kiprop. "I came here not to run but to win. It was very special. I never panic, it was a fast last lap and I knew I was good on the finish. I executed well."

Ethiopia's Almaz Ayana upset countrywoman Genzebe Dibaba in the women's 5,000m, denying her a golden double following her victory in the 1,500m.

Ayana clocked a championship record of 14:26.83 with Senbere Teferi taking silver in 14:44.07, a whisker ahead of Dibaba in an Ethiopian sweep of the podium.

"It's really beautiful to own this title," said Drouin. "I knew I was in good shape but hoping to win and making it actually happen are two different things."