This time Usain Bolt shot down not only Justin Gatlin but the cavalry too, anchoring rampant Jamaica to a fourth successive 4x100 metres world relay title as the USA sprinters imploded in Beijing. 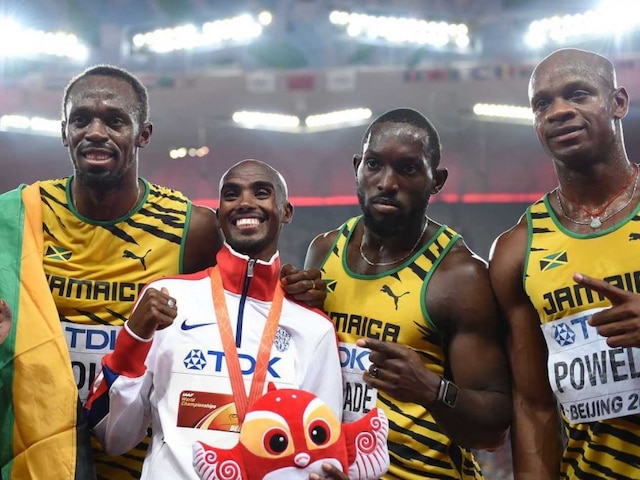 This time Bolt shot down not only Justin Gatlin but the cavalry too, anchoring rampant Jamaica to a fourth successive 4x100 metres world relay title as the USA sprinters imploded in Beijing.

Meanwhile, Farah became the first man to win back-to-back world distance doubles and Eaton broke his own decathlon world record on a pulsating penultimate evening at the Bird's Nest stadium.

Any faint hopes the Americans had of ambushing Bolt's latest treble attempt went up in smoke when Tyson Gay's final handover to Mike Rodgers was deemed illegal and they were dramatically disqualified to give hosts China a sensational silver.

But even the anticipation of more Bolt fireworks took a back seat as iron man Eaton retained his world title in style after wringing every last drop of energy from his shattered body.

"It's an awesome result," said a jubilant Eaton. "How many more points can I get? I don't know, but you can bet your ass I'm going to try to get more!"

Not to be outdone, Jamaica's women retained their world crown in the 4x100m, with Britain's Farah winning the 5,000m to make it three distance doubles in a row, including the London Olympics.

Bolt put on a typically electric display at the Bird's Nest, where he shot to fame at the 2008 Olympics, leaving Rodgers for dead on the last leg as Jamaica won in 37.36 seconds.

After completing yet another individual sprint double in the 100 and 200m earlier this week, Bolt roared home after team-mates Nesta Carter, Asafa Powell and Nickel Ashmeade safely negotiated the first three legs.

The USA weren't so lucky and they were disqualified after Tyson Gay's bungled handover to Rodgers strayed outside the baton-passing area, promoting a disbelieving China to second.

"I saw the mess at 300m and was glad we were not in it," said Bolt after claiming an astonishing 11th world title. "It's called pressure. They won the world relays (earlier this year) and the pressure was on them. I told you I would come back here and win."

Anchored by the six-times Olympic champion, the Jamaicans have now won all world and Olympic sprint titles since 2008.

Eaton produced a lung-busting last lap in the 1,500m to set a new world record -- the first of the championships -- by improving his previous mark to 9,045 points, and then collapsed to the track with his face contorted in agony as the crowd rose to acclaim him.

"I had five-and-a-half hours sleep last night," said Eaton after running the 1,500m in four minutes, 17.52 seconds to ensure the world record.

"In the hurdles it was hard to get over (hurdles) nine and 10 and I thought 'Geez, I'm getting old'. In the 1,500m I was having doubts I could run that fast.

"Where do you find that inner strength? I don't know, but you've got to dig deep."

Elsewhere the irrepressible Farah broke Kenyan Caleb Ndiku's brave resistance with an electrifying burst in the home straight to win in 13 minutes, 50.38 seconds.

It was an astonishing seventh successive victory in the 5,000 or 10,000m at a world championships or Olympics for the Briton, who indulged in some celebratory shadow boxing with the silver medallist as the two rivals congratulated each other.

"It takes a lot of energy to win that way," said Farah, who reeled in Ndiku over the last lap before his devastating late kick. "I never panicked. You have to believe in yourself and it felt amazing, incredible, to do the double."

Double Olympic champion Shelly-Ann Fraser-Pryce, who had already won the individual gold, anchored Jamaica to victory in the women's 4x100 metres in a championship best 41.07. The Americans took silver in 41.68 and Trinidad and Tobago the bronze in 42.03.

There was an upset when Marina Arzamasova of Belarus beat defending champion Eunice Sum to win the women's 800m in a nail-biting finish, clocking 1:58.03 to pip Canadian Melissa Bishop and Sum at the line.

In the morning, Matej Toth captured Slovakia's first ever world championships gold with a crushing victory in the men's 50 kilometres walk.