Usain Bolt ran the final leg of the relay at a packed Bird's Nest stadium, hurtling through the line in 37.36 seconds after teammates Nesta Carter, Asafa Powell and Nickel Ashmeade had successfully got the baton around. 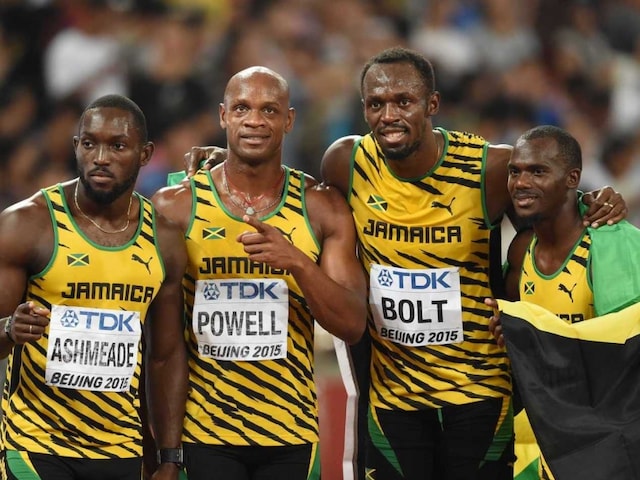 The Jamaican relay team after winning the gold.© AFP
Beijing:

Usain Bolt capped a memorable world championships by winning a third gold on Saturday as anchor of Jamaica's 4x100m relay team, while the United States were disqualified to hand China a shock silver.

Bolt ran a blistering final leg at a packed Bird's Nest stadium, hurtling through the line in 37.36 seconds after team-mates Nesta Carter, Asafa Powell and Nickel Ashmeade had successfully got the baton around.

The victory gave Bolt his 11th world gold medal -- his only blemish being the 100m at the 2011 Daegu worlds, when he was disqualified after a false start.

The US quartet of 100m bronze and silver medallists Trayvon Bromell and Justin Gatlin, and fellow finalists Tyson Gay and Mike Rodgers, were initially awarded silver before being disqualified over a botched final handover which strayed beyond the passover limit.

China, headed by individual 100m finalist Su Bingtian, delighted the home crowd when they were upgraded to silver in 38.01sec, while Canada moved up to bronze (38.13).

Bolt said the victory was particularly sweet given the scepticism he had encountered in a season during which he missed six weeks because of pelvic joint pain.

"It's always a good way to end a championships like that," he said.

"It's pretty much one of my best (results) because of what I've been through this season, the doubts that people have had, just everything.

"I came here and executed to the best of my ability and got three gold medals so I'm happy about that."

Bolt added, however, that there "was never any pressure".

"You can't have doubts. The moment you have doubts creeping in you shouldn't run.

"I know what I want coming here. My coach (Glen Mills) is always confident in me and I'm confident in him so as long as we work as a team, I have no worry I'll ever be defeated," he said.

"I came out here and proved everybody that you can never call Usain Bolt out.

"I'm a champion and I show up when it matters."

There was a distinctly gladiatorial atmosphere in the Bird's Nest as all teams entered the arena through a traditional Chinese facade, passing cheerleaders and flagbearers to be introduced to a raucous capacity crowd.

Racing in lane four, Carter's opening leg for Jamaica saw him slip slightly down on Bromell. Powell ran his second leg in full chase of Gatlin, silver medallist to Bolt in both the 100 and 200m, in lane six.

Ashmeade took up the chase for Jamaica around the back bend, but Gay had his beating and it looked as if Bolt would not have a genuine chance of catching the Americans.

But there was a disaster as Gay's handover to Rodgers misfired and went outside the baton-passing area, leading to the US team being disqualified.

Ashmeade had no such problem with his own baton pass to Bolt, and suddenly the towering Jamaican had a clear run at the line.

Straight into the lead with Rodgers searching in thin air for the baton behind him, Bolt opened up all cylinders to race through for victory at what could be his last world championships.

Gatlin simply put his team's handover disaster down to the atmosphere in the stadium.

"Mike Rodgers and Tyson got lost in the excitement and the crowd and they couldn't hear each other," the American said.

"It's a bummer because my team-mates worked very hard for that.

"I came away with hardware, I'm pleased and happy with my performance at the championships. I'm hungry for me."

Not only has Bolt won 11 individual world or Olympic sprint titles from a possible 12 since he took track and field by storm at the 2008 Beijing Olympics, but the 29-year-old has also been a key part of the relay team.

Despite losing to the US team at this year's World Relays, much to Bolt's visible annoyance, the Jamaicans have won all world and Olympic sprint titles since the 2008 Beijing Games, and also set a world record of 36.84sec while winning gold at the London Games.