Indians gave a good account of themselves in the women's marathon at the World Athletics Championships as O.P. Jaisha registered a time of two hours, 34 minutes and 43 seconds to set a new national record. 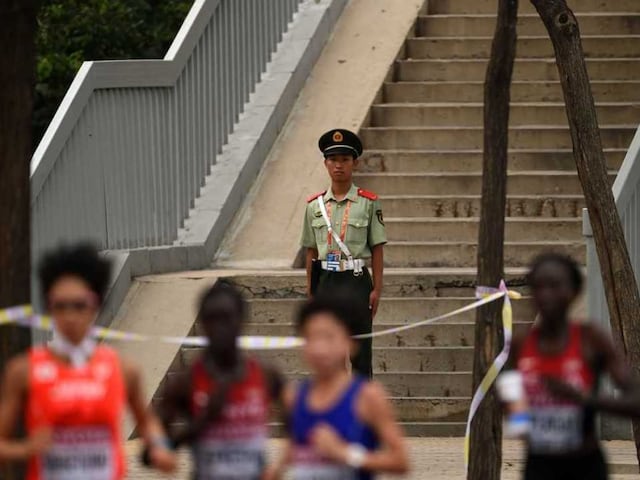 Indian athletes were impressive in the women's marathon at Beijing.© AFP
Beijing:

Â O.P. Jaisha and Sudha Singh rounded off the Indian campaign at the World Athletics Championships with a spirited performance in the women's marathon here on Sunday.

Jaisha registered a time of two hours, 34 minutes and 43 seconds to set a new national record and claim the 18th place on the final day of the biennial extravaganza.

Sudha, who clocked 2:35:35, also did better than the previous national mark of 2:37:29 set by Jaisha at the Mumbai marathon earlier this year.

The result means that both Jaisha and Sudha are well within the qualifying standard for the 2016 Rio Olympics.

Lalita Babar, the third Indian in the field, did not start the race.

The battle for the title saw an exciting finish as Mare Dibaba of Ethiopa beat a strong challenge from Kenya's Helah Kiprop and Eunice Kirwa of Bahrain to take the gold medal with a time of 2:27:35.

"We had planned our race well. Training with Dr. Nikolai Snesarev has been very beneficial and we were able to identify what areas to improve upon. The plan was to run a balanced race, not get too excited and maintain a strong rhythm and I am glad I was able to do that," the Kerala athlete was quoted as saying in a release.

Jaisha, who won the first marathon she ran -- the 2015 Mumbai event -- has been showing steady improvement since taking up the 42km event.

Sudha, perhaps better known for her exploits in the 3000m steeplechase, has also made the switch to the marathon in admirable fashion.

Sudha had clocked 2:42.12 in Mumbai and the 29-year-old believes that she has it in her to improve on the time she set on Sunday.

On an overcast but pleasant morning in Beijing, both athletes got off to a balanced start, concentrating on holding their positions and aimed to settle into a rhythm as quickly as possible.

The duo though seemed to have found their rhythm soon after as they started a steady ascent up the field. At the 10 km-mark, Sudha had made up seven positions while Jaisha had made up eight.

The 32-year-old Jaisha, an experienced runner, then slowly started eating up Sudha's lead, climbing up right behind her compatriot in 26th place at the half-way mark. Jaisha took the lead a little before the 30 km-mark and ensured that she maintained her lead.