During his visit to India, Damon Hill will meet elite athletes and spread the message worldwide about the 11th edition of the Mumbai Marathon which will take place on January 19. 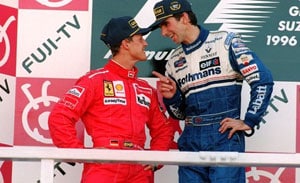 Former Formula One world champion Damon Hill (in file pic with Michael Schumacher) was on Tuesday named the event ambassador for the 11th edition of the $360,000 Mumbai Marathon to be run on January 19.

The 1996 British world champion was Michael Schumacher's arch rival during the mid-1990s. He is the son of late Graham Hill and they are the only father-son duo to win the F1 drivers' title.

Born September 17, 1960, Hill has had 122 Grand Prix entries, 22 wins, 42 podiums, 20 poles and 19 fastest laps in his career which lasted from 1992-99. The death of his father in a plane crash in 1975 left the 15-year-old in drastically reduced circumstances and Hill worked as a labourer and motorcycle courier to support his education.

The 53-year-old started his racing career in 1991 as a test driver with the championship-winning Williams team while still competing in Formula 3000. Racing for Williams in 1996, Hill went on to win the title ahead of his rookie teammate Jacques Villeneuve.

Hill will be here from January 16 till event day and hopes to inspire the younger generation of Indian sportspersons to work hard for glory. During his visit here he will meet elite athletes, encourage amateur athletes and spread the message worldwide about the event and the running movement in India.

Comments
Topics mentioned in this article
Athletics Honda Brawn McLaren Sepang Damon Hill Michael Schumacher Giancarlo Fisichella Lewis Hamilton
Get the latest updates on IPL 2020, check out the IPL Schedule for 2020 and Indian Premier League (IPL) Cricket live score . Like us on Facebook or follow us on Twitter for more sports updates. You can also download the NDTV Cricket app for Android or iOS.