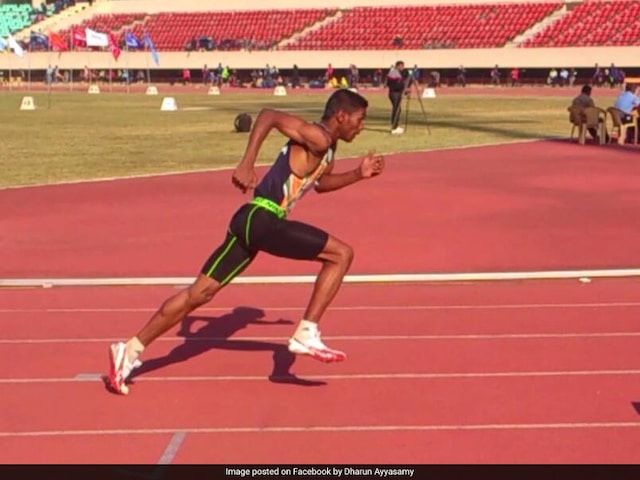 Unheralded Tamil Nadu athlete Dharun Ayyasamy smashed the men's 400m hurdles national record and in the process grabbed a Commonwealth Games ticket on the concluding day of the 22nd Federation Cup National Senior Championships. Triple jumper Arpinder Singh also booked his second straight Commonwealth Games berth, by winning gold with an effort of 16.61m -- a centimeter more than AFI's qualifying standard of 16.60m. Veteran Renjith Maheswary was unfortunately stretchered out with a suspected left knee dislocation and right index fingure fracture after slipping on his run-up while taking his last step before leaping in his fifth attempt. Before his injury, the 32-year-olMaheswary, the current national record holder, had leaped to a 16.51m jump in his second attempt to win the silver.

In all, nine athletes crossed AFI's qualifying mark from the championships. The 21-year-old Dharun, who just recovered from a bout of typhoid, clocked 49.45 seconds, the exact the qualifying standard for the Gold Coast CWG set by the Athletics Federation of India to the disbelief of the spectators at the NIS Patiala.

It was a clean sweep by Tamil Nadu with Santhosh Kumar ad Ramachandran M winning the silver and bronze respectively clocking 50.14 seconds and 51.61 seconds.

Dharun has not won any major national or international event -- his last medal had come at an Indian Grand Prix event in Bengaluru, in July 2016. His effort at that meet -- 50.51 -- was his earlier best.

He was part of the Indian 4x400m relay race team in the Rio Olympics, where he ran in the third leg. The quartet was disqualified.

"I reached here on February 24 and soon after arriving here, I suffered from typhoid. I recovered and then started light training only on March 2. So, I could not do any proper training before this championships. I ran in the individual 400m race on March 6 and finished sixth. Apart from that I did not run any full 400m race," Dharun said after his race.

"Leave alone making a national record and qualifying for the Commonwealth Games, I had not thought of winning the race. I was just participating in the race. I was not hoping to qualify for the CWG, I was thinking of trying for the Asian Games, but it just happened," he added.

For Arpinder, it was his second event at the same venue in less than 10 days as he had soared to 16.45m in the Indian Grand Prix event on February 27. He began with a 16.23m jump and did a 16.48 in his fourth attempt. The big jump came in his fifth attempt as he cleared 16.61m to become the ninth athlete to touch the AFI qualifying standard.

In other events, Siddhanth Thingalaya won the men's 110m hurdles in 13.76 seconds while Sapna Kumari took the gold in women's 100m hurdles.

Veteran Sudha Singh disappointed as she crossed the finishing line in the women's 3000m steeplechase event with a timing of 9 minute 50.78 seconds while the qualifying mark stood at 9:34.01.

The Indian team for the Commonwealth Games will be announced tomorrow. India has been given a quota of 37 track and field athletes by the CWG organisers. The names of four 20km race walkers -- two men and two women -- have already been announced.