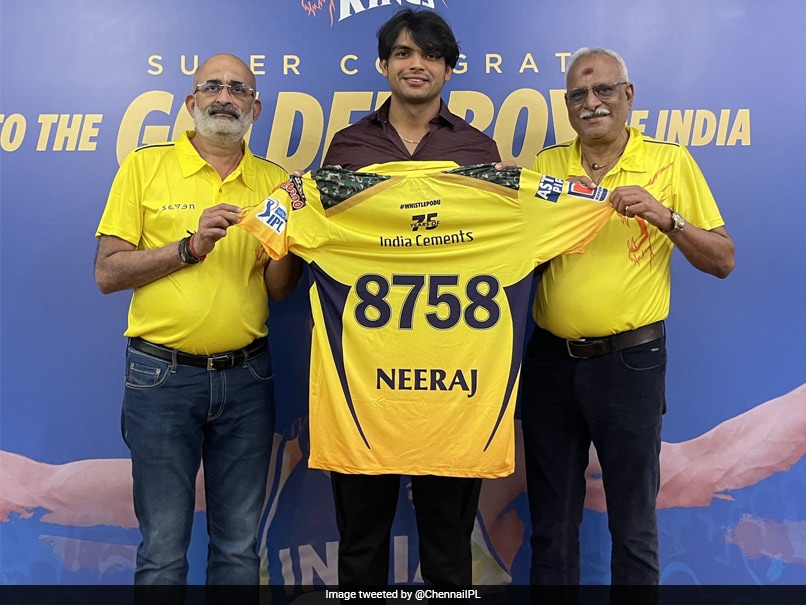 CSK also presented a special jersey with the number 8758 to Neeraj Chopra.© Twitter

Chennai Super Kings (CSK) have rewarded Olympic Gold medalist Neeraj Chopra with Rs 1 crore for his stellar achievement - winning gold in the javelin throw at the 2020 Tokyo Olympics - in New Delhi on Sunday. Chennai Super Kings also presented a special jersey with the number 8758 (highlighting his medal-winning effort of 87.58m) as a mark of respect to Neeraj, who joined Abhinav Bindra as only the second individual gold medallist in the Olympics.

The one with the Golden boy @Neeraj_chopra1 ! Super happy to hand our to the arms that made us proud!
Read : https://t.co/qiiw18aLH6#WhistlePodu #Yellove pic.twitter.com/rMpHwWD2F7

"The entire nation is proud of Neeraj for his stupendous achievement. By becoming the first Indian to win a medal (gold) in the track and field, he has set a benchmark and is an inspiration for the next generation. 87.58 is a number that will forever be etched in Indian sporting history and it's an honour for us to present this special jersey to Neeraj. We wish he brings more glory to the nation," said CSK CEO Kasi Viswanathan in an official statement.

The 23-year-old athlete, after receiving the award and special jersey, mentioned that the past two months have been an opportunity for him to experience new things and also thanked the Super Kings management for the support.

"Thank you so much for your support and for the prize. It feels good. The last two months have been hectic and an opportunity to experience new things. I never thought that I'll get so much love after winning gold. It was completely unexpected and it feels good. Hopefully, I'll work hard and get good results," Chopra said.

Chennai Super Kings Neeraj Chopra Athletics
Get the latest updates on IND vs NZ 2021, check out the Schedule and Live Score . Like us on Facebook or follow us on Twitter for more sports updates. You can also download the NDTV Cricket app for Android or iOS.